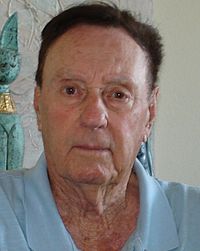 William Keith "Bill" Pitman (born February 12, 1920) was an American guitarist, actor and session musician. He was born in Belleville, New Jersey. Pitman played on some of the most celebrated and influential records of the rock and roll era.

Pitman is known for his Academy Award-winning song "Raindrops Keep Fallin' on My Head" that gave The Wild Wild West its unique musical signature.

All content from Kiddle encyclopedia articles (including the article images and facts) can be freely used under Attribution-ShareAlike license, unless stated otherwise. Cite this article:
Bill Pitman Facts for Kids. Kiddle Encyclopedia.