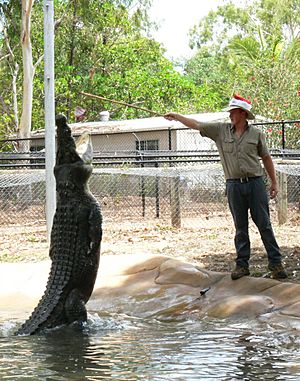 The sanctuary is a permanent home to over 100 species of Australian mammals and reptiles such as kangaroos, wallabies, koalas, wombats, crocodiles, and birds including parrots and cassowaries. In addition, the natural billabong (lake) at the center of the sanctuary is host to many visiting animals, some of which will breed and raise their young at the sanctuary. Visitors to the sanctuary can take guided or self-guided tours through the 11-hectare (27-acre) natural tropical bush.

The Billabong Sanctuary has won several awards, including the North Queensland Tourism Awards for Eco-tourism (2002 & 2006) and the Townsville City Council Environmental Excellence Award (1999).

All content from Kiddle encyclopedia articles (including the article images and facts) can be freely used under Attribution-ShareAlike license, unless stated otherwise. Cite this article:
Billabong Sanctuary Facts for Kids. Kiddle Encyclopedia.