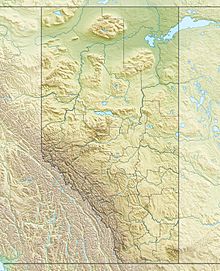 The Birch Mountain (BM) kimberlite field was discovered in 1998 and lies about 430 km (270 mi) north of Edmonton and 135 km (84 mi) northwest of Fort McMurray. It is part of the Northern Alberta kimberlite province, along with the Buffalo Head Hills kimberlite field and the Mountain Lake cluster.

The BM diatremes are hosted in the marine shales and silty shales of the Late Cretaceous Smoky or La Biche Group, and they are thought to have been erupted in an open marine to near shore marine setting in the Western Interior Seaway. Unconsolidated Quaternary sediments that reach thicknesses of more than 150 m (490 ft) now cover the bedrock in the area, so the diatremes were located primarily by aeromagnetic surveys followed by drilling.

The volcanic rocks of the BM field consist primarily of crater-facies pyroclastic kimberlite and resedimented kimberlite. They include massive layers, as well as bedded and graded layers of coarse lapilli alternating with layers of finer tuff. Lapilli and olivine phenocrysts are set in a grey-green matrix of serpentine, carbonate minerals (calcite, dolomite, and magnesite) and clay minerals. Phlogopite, oxide minerals (ilmenite, perovskite and spinel), apatite and pyrite are also present. Diamonds and microdiamonds have been recovered from samples taken from the Phoenix and Legend pipes.

The diatremes within the field include:

All content from Kiddle encyclopedia articles (including the article images and facts) can be freely used under Attribution-ShareAlike license, unless stated otherwise. Cite this article:
Birch Mountains kimberlite field Facts for Kids. Kiddle Encyclopedia.