Birley ward —which includes the districts of Base Green, Birley Estate, Charnock, Frecheville, Scowerdons and part of Hackenthorpe—is one of the 28 electoral wards in City of Sheffield, England. It is located in the southeastern part of the city and covers an area of 5.1 km2. The population of this ward in 2011 was 16,943 people in 7,393 households. It is one of the five wards that make up the Sheffield Attercliffe constituency.

Birley Estate is a housing estate in the southeastern part of Sheffield. It is built on what was Birley Moor just to the north of the small hamlet of Birley. Birley Spa to the northeast was a hotel and spa built in 1842 around a spring of mineral water. The building was restored in 2001/02 and is Grade II listed.

Base Green is a housing estate to the west of Birley and east of Gleadless. It is built on the land that was formerly Basegreen Farm. 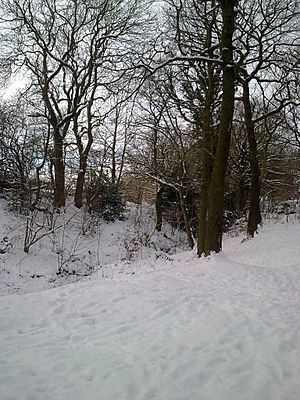 The Stoneley Woods, an ancient woodland in Charnock, during the Early 2010 Big Freeze (January 2010).

Charnock (sometimes called Charnock Hall) is a housing estate to the south of Basegreen. The estate was built on the former Charnockhall Farm which stood where Farm Close is today.

Charnock Hall Primary School is a primary school which currently educates around 400 pupils, aged 5–11. The report of the Ofsted inspection, in June 2010, assessed the school as being Good, point two on a four-point scale. The school has the Healthy Schools Award, the Artsmark Silver, and the Green Flag Award.

Situated on Carter Hall Lane, and next to Charnock Hall Primary School, The Charnock Recreation grounds is a large community park.

In January 2006, The Friends of Charnock Recreation Grounds group was launched. Through the work of the group, the park has been subjected to a range of improvements including the addition of new playground equipment, a running track, and outdoor gym equipment. 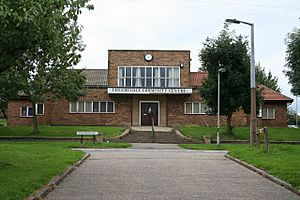 Frecheville is a housing estate to the north of Birley Estate developed in the 1930s by Henry Boot Limited. The firm constructed around 1,600 private houses, mainly traditional brick built 2 or 3 bedroom semi-detached family homes for rent and gave the Frecheville estate its name. A local pub's signboard shows the coat of arms of the Frecheville family, who were lords of the manor at Staveley but there is no evidence that the Frechevilles ever owned land on Birley Moor, so the name given to Frecheville remains something of a mystery. Frecheville also houses the parish church, library, a fishing pond and a community centre provided for the neighbourhood by the builder which still has an active forum and has run the Frecheville carnival every year between 1937 and 2006 with the exception of during the war years. The majority of homes on the estate are now owner occupied after being handed over to residents in the 1950s.

On Thursday 26 May 1955 a Gloster Meteor F8 (No. WE916) piloted by 21-year-old John Alexander Cohen from Cardiff on a night flight training exercise from RAF Worksop crashed in Frecheville when he apparently lost control whilst undertaking a controlled descent though cloud. The plane came in low over Stradbroke Road and the pilot was killed instantly as the plane dived steeply into the ground and exploded on impact in the field at the bottom of Silkstone Crescent at 11.22 pm. There was speculation at the time that he had deliberately stayed with the plane to steer away from the houses and into an open area. A memorial stone was placed in the garden at the top of the footpath down to the housing estate but it has since been removed. 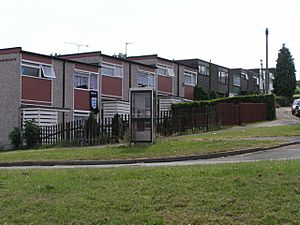 Long since demolished council housing on the Scowerdons estate.

Most of Hackenthorpe is in the Beighton ward.

All content from Kiddle encyclopedia articles (including the article images and facts) can be freely used under Attribution-ShareAlike license, unless stated otherwise. Cite this article:
Birley Facts for Kids. Kiddle Encyclopedia.