Staveley is a town within the borough of Chesterfield, in Derbyshire, England. The town is situated alongside the River Rother, adjacent to Eckington to the north, Barlborough to the east, Sutton-cum-Duckmanton civil parish to the south and Brimington to the west.

Staveley has traditionally been a mining town with several large mining pits situated in and around the area, with the closest being Ireland Pit (Ireland Colliery Brass Band is named after this colliery). However this pit has now closed down along with the others in the area.

Staveley Miners Welfare on Market Street was built in 1893 as an indoor market hall by Charles Paxton Markham. At that time it was called Markham Hall in memory of his father. Markham played a large role in the industrial development of the area around Staveley. Through his company Markham & Co. and its successor Staveley Coal and Iron Company, Markham owned ironstone quarries, several coal mines (including Markham Colliery), chemical works, ironworks and an engineering works specialising in mining and tunnelling equipment.

Other major local industries in recent history have included Staveley Works foundry and Staveley Chemicals. The nationwide decline in industry has meant that Staveley Chemicals and Staveley Works have now almost entirely closed, with the only section of the chemical plant remaining being the P-aminophenol plant (a key component to making Paracetamol), which is run by American/Irish company Covidien. Notice has been served on the plant, earmarked for closure around June 2012, this closure will mark the end of over 100 yrs. of chemical production at Staveley..

It is also the home town of the Townes Brewery. Modern industry includes a plastic pipe moulding factory for Brett Martin plc. There was also a wood wool production unit on Staveley works.

The New Markham Vale Loop Road has been completed and opens up the former Markham coal field areas to development, linking the town to a new junction (29A) on the M1 motorway, this junction opened in early July 2008. This is part funded by European Union regeneration money. The scheme also reinstates part of the former Chesterfield Canal which crosses the route. There is a long term project to reinstate the canal from Chesterfield to Kiveton where it currently terminates. Sections from Chesterfield to Brimington were reinstated as part of previous stages of the Chesterfield Bypass and opencast schemes on part of the former Staveley Coal and Iron Company site which was part of British Steel Corporation following Nationalisation. The new Staveley Town Basin was officially opened on 30 June 2012 and forms the centre piece of the imaginative redevelopment of the Chesterfield Canal in Staveley. The basin is designed to provide facilities to enable the economic development of the isolated section in advance of full restoration. It will provide secure short- and long-term moorings, slipway, car parking, cycle racks, toilets and showers as well as a large open play area which can also be used for major waterway events and festivals.

As part of the Markham Vale scheme to regenerate the site of the former Markham Colliery site there was a proposal to build a "Solar Pyramid" to form the world's largest functional timepiece. This project has now been cancelled. However on the site near Poolsbrook Country Park, a caravan site for tourists has now been built boosting numbers to the country park. The area has several trails for walkers and mountain bikers along former pit railway lines. 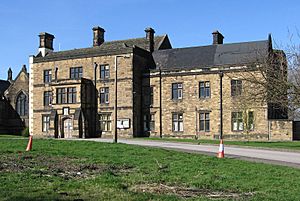 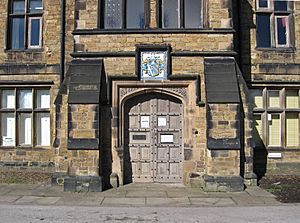 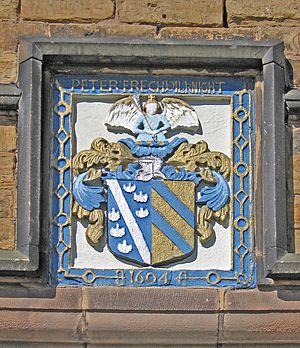 Staveley Hall is situated to the northeast of St John The Baptist Church in Staveley, with vehicular access from the Lowgates traffic island. The Hall in its present form was built by Sir Peter Frecheville in 1604. Before the current building there had been buildings on this site for over 700 years. A brief history of the building and its ownership follows:

All content from Kiddle encyclopedia articles (including the article images and facts) can be freely used under Attribution-ShareAlike license, unless stated otherwise. Cite this article:
Staveley, Derbyshire Facts for Kids. Kiddle Encyclopedia.