Bittesby is a deserted village and former civil parish, now in the parish of Bitteswell with Bittesby, in the Harborough district of Leicestershire, England. It is near the A5 Watling Street, about three miles from Lutterworth. The site of the village was adjacent to the route of the now disused Great Central Railway. According to the 2001 census the parish had a population of 6. 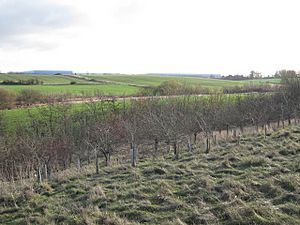 Bittesby was recorded in the Domesday Book as having 25 families resident. The village was depopulated in 1494. Hollow ways and house platforms remain on the site today. To the north of the site is an area of faced stonework, indicating the site of a chapel.

The village is a scheduled ancient monument.

All content from Kiddle encyclopedia articles (including the article images and facts) can be freely used under Attribution-ShareAlike license, unless stated otherwise. Cite this article:
Bittesby Facts for Kids. Kiddle Encyclopedia.