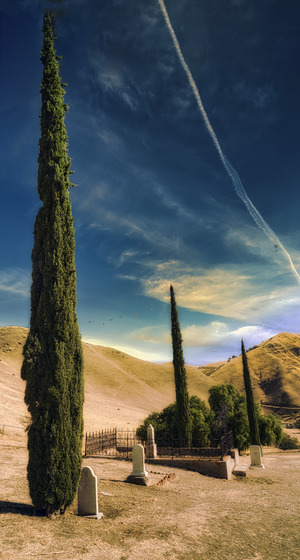 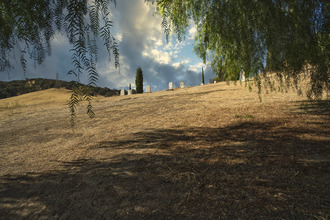 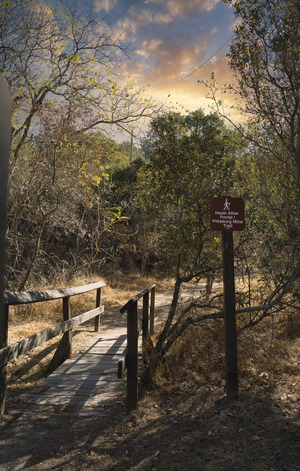 Trail to a mine, Black Diamond Mines

The Black Diamond Mines Regional Preserve is a 6,000-acre (2,400 ha) park located north of Mount Diablo in Contra Costa County, California under the administration of the East Bay Regional Park District (EBRPD). The district acquired the property in 1973. The preserve contains relics of 3 mining towns, former coal and sand mines, and offers guided tours of a former sand mine. The 60 miles (97 km) of trails in the Preserve cross rolling foothill terrain covered with grassland, California oak woodland, California mixed evergreen forest, and chaparral. 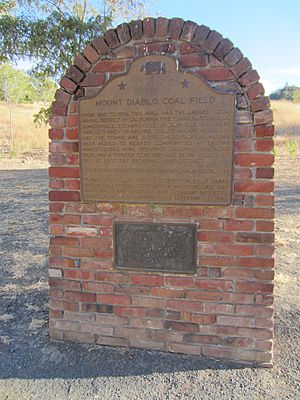 In 1859 William C. Israel discovered a coal deposit while clearing out a spring on his land at Horse Haven Valley, six miles south of Antioch. His initial attempt to mine the coal was not financially successful but soon other coal deposits were discovered nearby and mining operations grew rapidly. The area became known as the Mount Diablo Coalfield, the largest in California, producing more than 400 million short tons (357 million long tons) of coal during this time.

The area includes the remains of twelve coal mines and the sites of several long-gone coal mining towns. The Preserve contains over 200 miles (320 km) of mine workings. The largest and oldest town, Nortonville, had a peak population of about 1,000. Somersville, Stewartville, West Hartley and Judsonville were located in valleys to the east. The sites of Stewartville and West Hartley are located on private property outside the eastern boundary of the Preserve. The mines were the Empire, Central, Star, Corcoran, Pittsburg, Manhattan, Eureka, Independent, Union, Black Diamond, Mt. Hope, and Cumberland. The coal produced was of a low grade (sub-bituminous or lignite), but for a time in the 19th century, was the only readily accessible and economic source in California. Therefore, it was a very valuable resource and powering the railroads, ships and heavy industry of California. The mineral was often called 'black diamond."

The coal was carried to the San Joaquin River by three railroads: the Empire, Pittsburg, and Black Diamond, for shipment by barge to markets in San Francisco, Sacramento, Stockton and other communities. Coal mining activity ended as better-quality imported coal became affordable and as petroleum emerged as an energy source. After the coal mines closed, the towns were abandoned and the area was used mainly for cattle grazing. In 1974 the Southport Land and Commercial Company (former Black Diamond Coal Mining Company) donated 160 acres of its land holdings to help It become Black Diamond Mines Regional Park.

The coal mines are closed due to hazards posed by the age of the mines, the gases they produce (carbon dioxide and methane), and their rock quality (the shale and coal in the mines is unstable). In 1980 four young boys from the local area were killed by the methane gas from one of the open mines However, a number of mine openings have been turned into public-access openings which allow visitors to look into the mines and, for some, to walk a short distance underground. The deepest public-access opening is known as Prospect Tunnel. Visitors can enter 200 feet (61 m) of this excavation made by miners searching for coal. 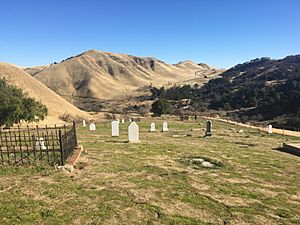 Rose Hill Cemetery, officially designated as a Protestant cemetery, the final resting place for over 200 residents of the coalfield, is located on a hillside between the Somersville and Nortonville townsites. After the mines closed and the nearby towns were abandoned, the cemetery fell into disuse. Many of the gravestones were stolen or destroyed by vandals. In 1960, Ansel Adams photographed two Italian Cypress trees in the cemetery, and called the image,"Poplars, Cemetery near Mount Diablo". The photo was taken with a Polaroid camera, though it's possible that it was not a typical consumer camera model.

Few people buried in the cemetery are identified. Many of the individual plots were never marked. More had only a wooden marker - nearly all of which were destroyed over the years by either wildfires that swept through the area or by insects, weather, or other natural cause. Vandals are said to have carried off some of the more permanent stone markers.

A few whose earthly remains were laid to rest here include: 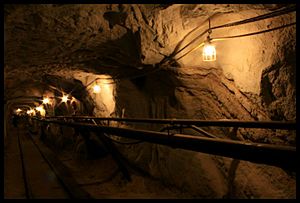 Inside the Hazel-Atlas Mine at Black Diamond Mines Regional Preserve

In the 1920s, a mine producing high-quality silica sandstone was started by owner Marvin Greathouse on a hillside above the Somersville townsite. He sold the product to the Hazel-Atlas Glass Company which operated a plant in Oakland manufacturing glass containers. Hazel-Atlas eventually purchased the mine and operated it until about 1945. Another sandstone mine in the Nortonville area produced sand used by the Columbia Steel mill in Pittsburg, California for steel casting. The two companies recovered more than 1.8×106 short tons (1.6×106 long tons) of sand between from the 1920s to the 1940s. The Hazel-Atlas mine is being restored and maintained by park staff and can be visited on guided tours which cover the area's mining history and geology. 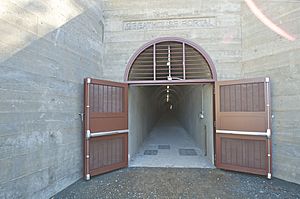 Inside the Greathouse portal, a 950 foot (290 m)-long section of the entrance corridor has been made into a museum. The first section is a series of self-guided exhibits, while the larger second section (which has a separate entrance from the outside), houses a reconstruction of the Hazel-Atlas works as it would have appeared around 1940.

EBRPD originally repurposed the Hazel-Atlas mine as a museum in the 1970s, but storm damage in 2007 forced closure of this attraction for extensive repairs. It did not reopen for five years.

The trails offer views of Mount Diablo, the Sacramento-San Joaquin River Delta, and on clear days, the Sierra Nevada.

The Preserve usually has an impressive variety of wildflowers in spring including the rare Mount Diablo fairy lantern (Calochortus pulchellus), Mount Diablo sunflower (Helianthella castanea), and Brewer's dwarf flax (Hesperolinon breweri). It is home to a variety of wildlife including deer, mountain lions, coyotes, foxes, bobcats, golden eagles, and a variety of hawks. The endangered San Joaquin kit fox (Vulpes macrotis mutica) and threatened California red-legged frog (Rana draytonii), California tiger salamander (Ambystoma californiense) and Alameda whipsnake (Masticophis lateralis) are present as well. The park is open year-round for hiking, mountain biking, and horseback riding from 8 am to dusk. A backpack camp and a group camp can be reserved for overnight stays. There have been many reports of a ghost in the park.

EBRPD accepted the donation of 50 acres (20 ha) by Antioch Holdings LLC on December 20, 2016. The property had been deeded to the holding company by Gordon Grevelle, president of Suncrest Homes, who had originally planned to build a gated residential community there when he had bought the tract in 1987. After going through an extensive permitting process and a decline in the California housing market, Grevelle decided that the project he had envisioned would be unlikely to meet his financial goals. Since the tract was already surrounded by park land, he chose to make the land available to EBRPD, which announced its intention to add the land to the Black Diamond Mines Regional Preserve. Grevelle estimated the market value of his donation at $3.5 million in 2016.

All content from Kiddle encyclopedia articles (including the article images and facts) can be freely used under Attribution-ShareAlike license, unless stated otherwise. Cite this article:
Black Diamond Mines Regional Preserve Facts for Kids. Kiddle Encyclopedia.