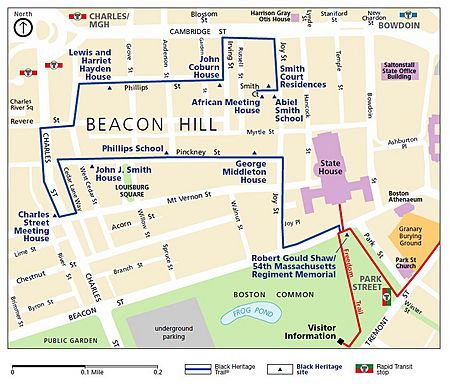 The Black Heritage Trail is a path in Boston, Massachusetts, winding through the Beacon Hill neighborhood and sites important in African-American history. The Black Heritage Trail links more than 15 pre-Civil War structures and historic sites, including the 1806 African Meeting House, the oldest surviving black church in the United States.

In 1783, Massachusetts became the first U.S. state to declare slavery illegal — mostly out of gratitude for black participation in the American Revolutionary War. Subsequently, a sizable community of free blacks and escaped slaves developed in Boston, settling on the north face of Beacon Hill, and in the North End. With a strong abolitionist community, Boston was long considered a desirable destination for southern black slaves escaping slavery via the Underground Railroad.

Sites along the Trail

The trail begins at the Abiel Smith School, 46 Joy Street, which houses the Museum of African American History. Interactive exhibits tell the story of Boston's black history and the American Civil Rights Movement.

At the renowned African Meeting House, 8 Smith Court, displays include speeches from well-informed orators. Built in 1806, the meeting house is the oldest surviving African-American church building in the United States; it became known as the Black Faneuil Hall during the abolitionist movement. Here Frederick Douglass gave many speeches, including his impassioned call for blacks to take up arms against the South in the American Civil War.

Among those who responded were the volunteers of the Massachusetts 54th Regiment, the first of the United States Colored Troops, who contributed so much to the Union effort. Their contributions were commemorated by an impressive monument, depicting their farewell march down Beacon Street, which was erected at the edge of Boston Common, across Beacon Street from the Massachusetts State House. Poet Robert Lowell won a Pulitzer Prize in the 20th century for his poem, "For the Union Dead," about this monument and soldiers. The regiment's heroic battle at Fort Wagner was the subject of the film Glory (1989).

The Black Heritage Trail winds around Beacon Hill. It passes significant schools, institutions, and houses, ranging from the small, cream clapboard residences of Smith Court to the imposing Lewis and Harriet Hayden House, 66 Phillips St. The Hayden House was a famed stop on the Underground Railroad and the Haydens sheltered many fugitive slaves from bounty hunters.

Although some black Bostonians lived in the North End and in the West End north of Cambridge Street, more than half the city’s 2,000 blacks lived on Beacon Hill just below the residences of wealthy whites. The historic buildings along today’s Black Heritage Trail were the homes, business, schools, and churches of a black community that organized from the nation’s earliest years to sustain those who faced discrimination and slavery.

All content from Kiddle encyclopedia articles (including the article images and facts) can be freely used under Attribution-ShareAlike license, unless stated otherwise. Cite this article:
Black Heritage Trail Facts for Kids. Kiddle Encyclopedia.