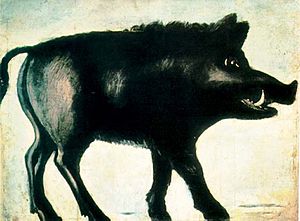 According to Irish folklore, the earthworks were created by the tusks of a huge black boar

The Black Pig's Dyke (Irish: Claí na Muice Duibhe) or Worm's Ditch (Irish: Claí na Péiste) is a series of discontinuous linear earthworks in southwest Ulster and northeast Connacht, Ireland. Remnants can be found in north County Leitrim, north County Longford, County Cavan, County Monaghan and County Fermanagh (see the map below). Sometimes, the Dorsey enclosure in County Armagh and the Dane's Cast in County Down are considered to be part of the dyke.

Similar earthworks can be found throughout Ireland, although the Black Pig's Dyke is the best known. A notable example is the Claidh Dubh ("black ditch"), anglicised Clyduff or Cleeduff, in eastern County Cork. It has three sections, the longest of which runs north–south for 24 kilometres (15 mi) from the Ballyhoura Hills to the Nagle Mountains. 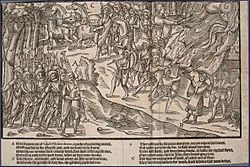 The earthworks usually consist of a bank with a ditch on either side. The bank is usually about 9 metres (30 ft) wide and the ditches are usually about 6 metres (20 ft) deep. Excavation of a stretch in County Monaghan revealed that the original construction was of a substantial timber palisade with external ditch. Behind the palisade was a double bank with intervening ditch. The timber structure was radiocarbon-dated to 390–370 BCE, so all of the earthworks may date to that period. Such dates confound the once popular theory that the earthworks were made in imitation of the Roman frontier in northern Britain.

Some have put forward the idea that the earthworks marked the ancient border of Ulster. However, there is no evidence that they "collectively constitute one border for one people" – the earthworks may not be contemporary and there are large gaps between them. Others suggest that their sole purpose was to prevent cattle raiding, which was very common in ancient Ireland. Two theories have been put forward to explain why there are large gaps between the earthworks. One is that they were simply built across trackways that were often used by cattle raiders, another is that the gaps between them were once heavily wooded and thus no manmade defence was needed. 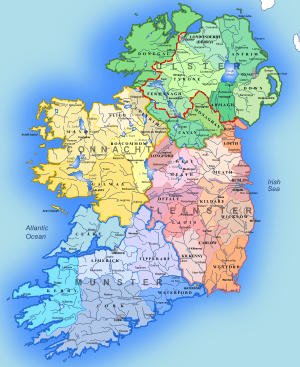 The modern counties and provinces of Ireland

The remains of the earthworks can be found in the following places:

All content from Kiddle encyclopedia articles (including the article images and facts) can be freely used under Attribution-ShareAlike license, unless stated otherwise. Cite this article:
Black Pig's Dyke Facts for Kids. Kiddle Encyclopedia.