Black Run (also known as Black's Run) is a tributary of Spruce Run in Union County, Pennsylvania, in the United States. It is approximately 4.7 miles (7.6 km) long and flows through West Buffalo Township and Buffalo Township. The watershed of the stream has an area of 4.72 square miles (12.2 km2). The stream has two unnamed tributaries and is not designated as an impaired waterbody. Its watershed is mostly forested, but there is some agricultural land. A few bridges have been constructed across the stream. 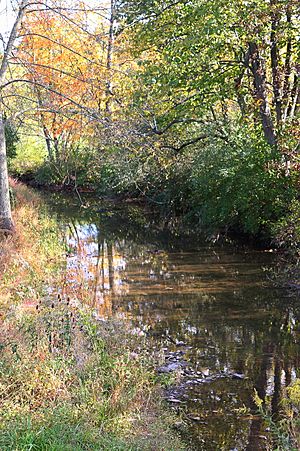 Black Run in its lower reaches

Black Run begins on Buffalo Mountain in West Buffalo Township. It flows southeast for several tenths of a mile, reaching the base of the mountain and entering a valley. Here, it turns east for a few miles, entering Buffalo Township and receiving two unnamed tributaries from the left. The stream eventually turns south-southeast for more than a mile before reaching its confluence with Spruce Run.

Black Run is not designated as an impaired waterbody.

A total of 71 percent of the watershed of Black Run is on forested land. Another 22 percent is on agricultural land and 3 percent is on impervious surfaces, though this may increase to 31 percent in the future.

The watershed of Black Run makes up approximately 3 percent of the Buffalo Creek watershed.

A tract of land near Black Run was surveyed by James Wilson in 1771. William Black settled on the stream in 1774. A wagonmaker and farmer named Phillip Stahl settled at the mouth of the stream near Mazeppa in 1793, having moved from Bucks County.

All content from Kiddle encyclopedia articles (including the article images and facts) can be freely used under Attribution-ShareAlike license, unless stated otherwise. Cite this article:
Black Run (Spruce Run tributary) Facts for Kids. Kiddle Encyclopedia.