Buffalo Creek is a tributary of the West Branch Susquehanna River in Union County, Pennsylvania, in the United States. It is approximately 28.5 miles (45.9 km) long and flows through Hartley Township, Lewis Township, West Buffalo Township, Mifflinburg, Buffalo Township, Kelly Township, and Lewisburg. Its watershed has an area of 134 square miles (350 km2). It is in the ridge-and-valley province of the Appalachian Mountains. Some streams and parts of streams in the creek's watershed are high-quality cold-water fisheries. There are ten types of rock formations and eight types of soil series in the watershed. The forests in the Buffalo Creek watershed are mostly deciduous hardwood, hemlock, and pine.

The waters of Buffalo Creek are slightly acidic, with a pH ranging between 5.0 and 6.7. Metals such as magnesium have been observed in the waters. Nonmetals in the water include dissolved oxygen, calcium carbonate, suspended solids, and phosphorus.

The etymology of Buffalo Creek is unknown. No buffalo have ever been definitely observed on the creek, although there are rumors about old buffalo wallows. Buffalo Township, Buffalo Valley, and Buffalo Mountain are all named after the creek. Historical industries in the watershed included mills and timbering, but livestock raising and agriculture are more common in the 21st century. 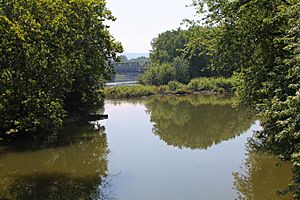 Buffalo Creek begins in Hartley Township, in Union County, near the Union County/Centre County border. It flows east and slightly north between Buffalo Mountain and Branch Mountain before falling steeply through two geographical features known as the Gooseneck and Buffalo Gap. The creek then turns southeast and flows out of Hartley Township. Upon leaving Hartley Township, the creek enters Lewis Township and meanders eastward, south of Jones Mountain. It passes through the Mifflinburg Reservoir. The creek then flows into southern West Buffalo Township and northern Mifflinburg. Shortly before exiting West Buffalo Township, Buffalo Creek picks up its tributary North Branch Buffalo Creek and briefly turns northwards before turning eastward again and leaving the township. 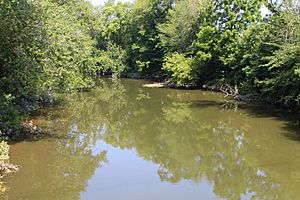 The topography of the creek's watershed is mountainous in its upper reaches. However, in its lower reaches, the creek flows through a wide valley bordered by steep ridges. The creek's channel is sinuous and flows through rock formations consisting of sandstone and limestone, with some iron ore. All of the creek's watershed is located in the ridge and valley physiographic province. It contains fractured, faulted, and folded sedimentary rocks. While there is some young bedrock in the watershed, parts of it have eroded away to reveal older bedrock, which is more resistant to weathering than the younger bedrock. Old bedrock formations in the watershed include the Tuscarora Formation, the Juniata Formation, and the Bald Eagle Formation. The visible portions of these formations are sandstones and conglomerates. The floor of the Buffalo Creek valley is home to younger carbonates belonging to the Keyser Formation and the Tonoloway Formation.

There are a number of soil associations that occur in significant amounts in the Buffalo Creek watershed. These include the Allenwood-Alvira-Shelmadine, the Dekalb-Ungers-Hazelton, the Edom, the Hagerstown-Elliber-Washington, the Holly-Basher-Monongahela, the Klinesville-Calvin-Meckesville, the Laidig-Buchanan-Meckesville, and the Weikert-Berks-Hartleton soil associations.

Near Mifflinburg, Buffalo Creek is "tiny and twisting" and its path is interrupted by fences and logs. There are also some strainers along its length. The creek is shallow for much of its length, even in stream pools. It mainly descends via gentle riffles. However, there is a weir with a height of 1 foot (0.30 m) downstream of Mazeppa.

Buffalo Creek flows through the center of the Buffalo Valley. In the early 1900s, the average rate of precipitation in the watershed was 40 to 45 inches (100 to 110 cm) per year.

The headwaters of Buffalo Creek are acidic due to geological formations that occur there. Also, the federal government states that there are 3945 acres of flood plains in the watershed. There are 800 acres of wetlands in the watershed.

The etymology of Buffalo Creek's name is unknown. In the 1700s, it was one of eight streams named Buffalo Creek in Pennsylvania, despite the almost total absence of buffalo in the state in that century. Except for legends, there is virtually no evidence that any buffalo ever lived in the Buffalo Creek area. However, some residents of the nearby village of Cowan claim that depressions on the northern bank of Buffalo Creek are buffalo wallows.

Buffalo Valley and Buffalo Mountain may have been named after Buffalo Creek.

Until the middle or the end of the 1700s, much of the Buffalo Creek watershed was on the frontier. During this time, there were many forts, such as Fort Titzell in the watershed. In 1769, the northern side of Buffalo Creek was surveyed. In the same year, the area in the vicinity of the creek was opened to settlers. John Sierer was among the first to arrive, settling on the creek in 1769. The prominent Revolutionary War veteran Colonel John Kelly built an estate on the northern bank of Buffalo Creek. In 1780, there was an Indian attack near the mouth of the creek.

Sawmills and gristmills were built in the watershed in the early 1800s and there was a mill on the creek by 1788. A large number of small mills producing grist, cider, woolens, and lumber were once on North Branch Buffalo Creek. There was a log school on Buffalo Creek in the 1830s. By the late 1800s, there was a significant lumbering industry. This also caused railroads to be built in the watershed. The lumbering industry became less prominent in the early 1900s. In the late 1800s, the area along North Branch Buffalo Creek was heavily settled and known as Jonestown. A county road paralleled the creek here. In the late 1800s or early 1900s, a locomotive crashed into Buffalo Creek while crossing it.

A gauging station was constructed on Buffalo Creek near Lewisburg in September 1913. In the early 1900s, the main industries in the creek's watershed included agriculture, furniture factories, flour mills, and brick works. The tributary Spruce Run was also used as a water supply by the White Deer Mountain Water Company and the main stem was used as power for some small gristmills. During this time period, major communities in the watershed included Lewisburg (3085 people), Mifflinburg (1559 people), Mazeppa (185 people), Cowan (150 people), Buffalo Roads (142 people), and Kelly Point (97 people). The Pennsylvania Railroad also went through the southern part of the watershed during the early 1900s.

In modern times the population of the watershed of Buffalo Creek has been rising, unlike the surrounding areas. The production of timber was once a major industry in the watershed. However, farming and livestock production are more common.

The forest that make up much of the Buffalo Creek watershed consist mostly of deciduous hardwood trees. However, there are some hemlock and pine trees in the watershed as well.

A total of 134 taxa of macroinvertebrates have been observed on the tributary North Branch Buffalo Creek as of May 11, 2012. The average Shannon index in the watershed is 2.2. The Pielou’s Evenness of the watershed is 0.77. EPT testing of microinvertebrate concentration resulted in an EPT index of 15. These values all indicate a relatively healthy stream.

Buffalo Creek has a higher level of bacterial contamination than the nearby Penns Creek and White Deer Creek. There is a possibility of fecal contamination in the creek.

The lower 14.8 miles (23.8 km) of Buffalo Creek, from Mifflinburg downstream to Lewisburg, are navigable by canoe during snowmelt and within four days of hard rain. The creek's difficulty rating is 1 and its scenery is described as "good" in Edward Gertler's book Keystone Canoeing.

Two of Buffalo Creek's tributaries, Spruce Run and Rapid Run, are high-quality cold-water fisheries. The upper portion of Buffalo Creek itself also has this rating. The Raymond B. Winter State Park is near the headwaters of Rapid Run. The Bald Eagle State Forest is also in the watershed. The creek is commonly visited by anglers and birdwatchers. In the watershed, other common recreational activities include driving, cross-country skiing, horseback riding, mountain biking, camping, swimming, and canoeing.

The levels of bacteria in Buffalo Creek are higher than the maximum levels considered safe for swimming. However, the number of pathogens in the stream that are caused by farm animals could be reduced by 80 percent.