Beaver Run is a tributary of Buffalo Creek in Union County, Pennsylvania, in the United States. It is approximately 3.7 miles (6.0 km) long and flows through Buffalo Township. The watershed of the stream has an area of 4.78 square miles (12.4 km2). It is designated as an impaired stream due to siltation from agricultural activity. A significant majority of the stream's watershed is on agricultural land and only a tiny minority is on forested land.

Beaver Run was named sometime before 1769. A bridge was constructed over the stream in Vicksburg in 1940. The watershed of Beaver Run is designated as a coldwater fishery and a migratory fishery. The stream has a low level of diversity amongst pollution-sensitive macroinvertebrates. However, its pathogen load is several quadrillion organisms per month. 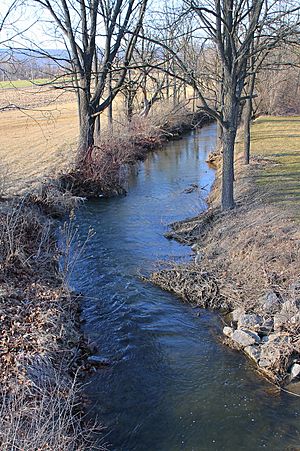 Beaver Run begins near the intersection of Pheasant Ridge Road and Dreisbach Church Road in Buffalo Township. It flows north-northeast for a short distance before turning north-northwest for a few tenths of a mile. The stream then turns west-northwest for several tenths of a mile before turning west and entering Vicksburg. Here, it turns north-northwest again and crosses Pennsylvania Route 45 before turning northeast and leaving Vicksburg. The stream then turns north for more than a mile and flows through a shallow valley before crossing Pennsylvania Route 192 and reaching its confluence with Buffalo Creek.

Beaver Run has no named tributaries. However, it does have a number of unnamed tributaries. Their stream codes are 18995, 18996, 18997, and 64983. All are designated as impaired by siltation due to agriculture.

Beaver Run is as degraded as some impaired tributaries of Buffalo Creek. However, Beaver Run was not designated by the Pennsylvania Department of Environmental Protection as an impaired waterbody until 2008. A total of 7.8 miles (12.6 km) of the stream and its tributaries are impaired. Despite this, it is not a major contributor of degradation to the main stem of Buffalo Creek, due to its low discharge. The cause of the impairment is siltation and the source is agriculture. The total maximum daily load date is 2021.

A concrete tee beam bridge carrying Pennsylvania Route 45 was constructed across Beaver Run in 1940. It is 26.9 feet (8.2 m) long and is located in Vicksburg.

In a 2008 report, the watershed of Beaver Run was ranked second amongst sub-watersheds in the Buffalo Creek drainage basin for restoration priority.

The drainage basin of Beaver Run is designated as a coldwater fishery and a migratory fishery. Beaver Run has a low level of biodiversity among pollution-sensitive macroinvertebrates.

Only 0.7 miles (1.1 km) of streams in the watershed of Beaver Run have a vegetated riparian buffer. However, this could potentially increase to 6.1 miles (9.8 km).

All content from Kiddle encyclopedia articles (including the article images and facts) can be freely used under Attribution-ShareAlike license, unless stated otherwise. Cite this article:
Beaver Run (Buffalo Creek tributary) Facts for Kids. Kiddle Encyclopedia.