North Branch Buffalo Creek is a tributary of Buffalo Creek in Centre County and Union County, in Pennsylvania, in the United States. It is approximately 13.5 miles (21.7 km) long and flows through Haines Township in Centre County and Hartley Township, Lewis Township, and West Buffalo Township. The watershed of the creek has an area of 22.9 square miles (59 km2). The creek has two named tributaries: Panther Run and Coal Run. Some streams in the watershed are impacted by nutrients, sedimentation, and siltation. The creek generally flows through mountainous terrain and has a sinuous channel. Rock formations made of sandstone are in its watershed and rock containing carbonate minerals is at its headwaters.

Roughly seven eighths of the watershed of North Branch Buffalo Creek is on forested land, but agricultural land such as row crops and pastures occurs, as do impervious surfaces. The creek was historically used as water power for a number of mills and logging and agriculture have also been historically done in its watershed. It passes through a water supply reservoir known as the Mifflinburg Reservoir. A number of bridges have also been constructed across it.

The drainage basin of North Branch Buffalo Creek is designated as Exceptional Value waters in one reach, a High-Quality Coldwater Fishery in another reach, and a Migratory Fishery throughout. Several types of trout inhabit it, both naturally and through stocking. The creek has a healthy population of benthic macroinvertebrates. It flows through The Hook Natural Area and Bald Eagle State Forest. A number of hiking trails are in its vicinity. 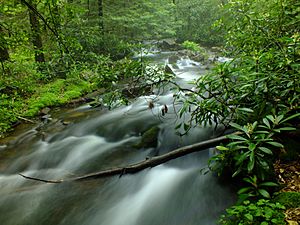 Upon exiting Centre County, North Branch Buffalo Creek enters Hartley Township, Union County. It continues flowing east-northeast through the valley for a few miles. The creek then flows between Buck Ridge and Dogback Mountain before turning south-southeast for a few tenths of a mile. In this reach, it receives Panther Run, its first named tributary, from the left. It also passes by Ice Spring and the western edge of Jones Mountain. The creek then turns east for more than a mile, flowing between Jones Mountain and Little Mountain. It then reaches Lewis Township and turns east-southeast. After some distance, the creek turns northeast and then east-northeast, passing through the Mifflinburg Reservoir. Several tenths of a mile further downstream, its valley broadens considerably and it flows east for a few miles. The creek then turns south-southeast for a few miles, passing by Lake McClure and receiving the tributary Coal Run from the right. It then turns southeast for several tenths of a mile before reaching its confluence with Buffalo Creek.

Some stream reaches in the watershed of North Branch Buffalo Creek are designated as impaired. The causes of impairment are nutrients and sedimentation/siltation, while the source of impairment is grazing-related agriculture. However, it is not impacted by acid deposition, even though the nearby Buffalo Creek is. On November 29, 1945, the discharge of the creek upstream of the Mifflinburg Reservoir was measured to be 6.28 cubic feet per second (0.178 m3/s).

The waters of a stream in the watershed of North Branch Buffalo Creek in The Hook Natural Area are a dark amber color. This coloration is caused by decaying organic matter in the groundwater that flows into the creek.

The headwaters of North Branch Buffalo Creek are on rock containing carbonate minerals, such as limestone and dolomite. Jökulhlaup surfaces occur in the vicinity of the creek. The surface consists of a northern arm and a southern arm, with the former being younger than the latter, though both date to the middle Pleistocene. The surface is bouldery and has a low gradient. An ice-dammed lake also used to exist on the creek. It had a volume of 0.215 square kilometers (0.083 sq mi), a surface area of 3.56 square kilometers (1.37 sq mi), and a depth of 60 meters (200 ft). Mountains in the vicinity of the creek include Jones Mountain and Buffalo Mountain.

North Branch Buffalo Creek flows through a narrow valley surrounded by steep hills in mountainous terrain. Its channel is sinuous and flows through rock formations consisting of sandstone.

In the northern arm of its jökulhlaup surface, North Branch Buffalo Creek has a braided channel. The channel has only cut slightly into the surface in this reach. The creek has been designated as a High-Gradient Clearwater Creek. A gravelly loam known as the Elkinsville gravelly loam occurs near North Branch Buffalo Creek, as well as many other major steams in Union County. The top 6 to 8 inches (15 to 20 cm) of this soil are a pale brown, porous loam that contains some organic matter. From the bottom of this layer down to 15 inches (38 cm), the soil becomes a light yellow-brown. Further down, the soil becomes heavier and contains less gravel. Below 36 inches (91 cm), it is a yellowish, heavy loam or crumbly clay loam.

The watershed of North Branch Buffalo Creek has an area of 22.9 square miles (59 km2). Of this, 22.09 square miles (57.2 km2) is in Union County. The mouth of the creek is in the United States Geological Survey quadrangle of Mifflinburg. However, the source is in the quadrangle of Woodward. The creek also passes through the quadrangle of Hartleton. The watershed contains 32.1 miles (51.7 km) of streams. Of these, 3.2 miles (5.1 km) are in agricultural land. In general, the stream flows through countryside, including farms and meadows.

In 1771, Jacob Fought purchased a tract of land at the mouth of North Branch Buffalo Creek from Captain Joseph Green. The tract had an area of 216 acres (87 ha) and Fought built the first gristmill in the area on it. It was also for a period of time used as the polling location for Northumberland County's third election district.

In a 2008 report, the watershed of North Branch Buffalo Creek was ranked sixth amongst sub-watersheds in the Buffalo Creek drainage basin for restoration priority. There is a gauging station for discharge on the stream.

The drainage basin of North Branch Buffalo Creek upstream of the Mifflinburg Water Supply Dam is designated as Exceptional Value and a Migratory Fishery. From the dam downstream to the creek's mouth, the drainage basin is designated as a High-Quality Coldwater Fishery and a Migratory Fishery. Wild trout naturally reproduce in the creek from its headwaters downstream to its mouth. Two reaches of the creek are classified as a Class B trout stream. A reach of the creek has also been stocked with brown trout and rainbow trout. However, brook trout naturally inhabit it.

No agricultural stream reaches in the watershed of North Branch Buffalo Creek contain forested riparian buffer strips. Shrub swamps and conifer swamps occur in the wetland at the headwaters of the creek. The shrub swamp type contains speckled alder, sedges, and peat moss. The conifer swamp contains eastern hemlock, rhododendron, peat moss, and various shrubs and herbs. There are no known species of special concern in the wetland, but one was observed nearby in 1990.

The part of the North Branch Buffalo Creek watershed that is in The Hook Natural Area once was dominated by hemlock, white oak, and white pine. However, trees such as white pine, red maple, white oak, red oak, scarlet oak, black oak, and chestnut oak are predominant in the area today, as are white birch, yellow birch, and black birch.

A reach of North Branch Buffalo Creek is in Bald Eagle State Forest. Part of it also flows through The Hook Natural Area. Villages in the watershed include Johnstown and Red Bank. The creek can be accessed from both of these. At least one hiking trail closely follows the creek as far downstream as the Mifflinburg Reservoir. Trails in the creek's vicinity include the Frederick Trail and the Braucher Path. Additionally, the Mid State Trail passes by its headwaters.

Although North Branch Buffalo Creek historically had industrial uses, its main applications in modern times are recreational. The Buffalo Mills Hunting Camp, a hunting camp that was used by lumberjacks and sawmill workers, is in the vicinity of the creek.

All content from Kiddle encyclopedia articles (including the article images and facts) can be freely used under Attribution-ShareAlike license, unless stated otherwise. Cite this article:
North Branch Buffalo Creek Facts for Kids. Kiddle Encyclopedia.