Rapid Run is a tributary of Buffalo Creek in Centre County and Union County in Pennsylvania, in the United States. It is approximately 14.4 miles (23.2 km) long and flows through Miles Township in Centre County and Hartley Township, Lewis Township, West Buffalo Township, and Buffalo Township in Union County. The watershed of the stream has an area of 18.7 square miles (48 km2). Some streams in the watershed are impacted by nutrients, sediment, E. coli, and thermal radiation and one unnamed tributary is designated as an impaired waterbody. Rapid Run is a freestone mountain stream in the ridge and valley physiographic province. It flows through a lake known as Halfway Lake and also passes through the Rapid Run Gap.

Rapid Run is one of the major tributaries of Buffalo Creek. Its watershed is mostly forested, but there is some agricultural land and impervious surfaces as well. Pennsylvania Route 192 runs alongside the stream for much of its length. A number of bridges have been constructed across the stream. The drainage basin is designated as a High-Quality Coldwater Fishery and a Migratory Fishery. Additionally, a reach of Rapid Run is Class A Wild Trout Waters. Various eels and freshwater sponges have also been observed in the stream. Rapid Run flows through Bald Eagle State Forest, R.B. Winter State Park, and Sand Bridge State Park. 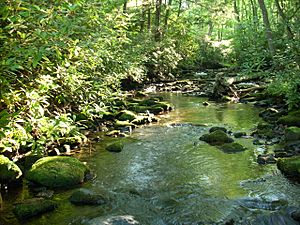 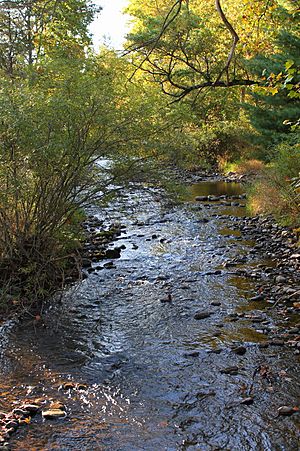 Rapid Run near its mouth

Rapid Run begins in a valley in Miles Township, Centre County. It flows in a generally east-northeasterly direction for a few miles and receives the tributary Yankee Run from the left before entering Hartley Township, Union County. In this township, the stream crosses Pennsylvania Route 192 and passes by a spring called The Little Bubbler. The stream then turns south-southeast, passing through Halfway Lake, where it receives the tributary Halfway Run from the left. From the southern end of the lake, it continues flowing south-southeast, crossing Pennsylvania Route 192 again and entering a considerably narrower valley that it shares with Route 192. It passes by Bake Oven Mountain and Seven Notch Mountain for several tenths of a mile before turning east-northeast to stay in the valley.

The concentration of alkalinity in Rapid Run between Buffalo Trail and T-383 is 3 milligrams per litre (0.00019 lb/cu ft). 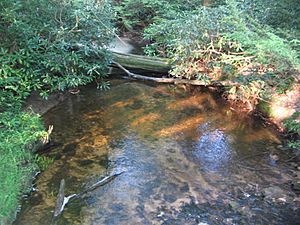 A lake known as Halfway Lake is located on Rapid Run. It has an area of 7 acres (2.8 ha) and is fed by streams and springs. The lake has a sandstone dam. Rapid Run is a freestone stream in the ridge and valley physiographic province.

Upstream of Halfway Lake, Rapid Run flows through a valley known as Brush Valley. Downstream of the lake, it exits this valley through a deep water gap. The water gap contains a slope covered in quartzite boulders, some of which have diameters of more than 6 feet (1.8 m). Additionally, terrace ridges such as Oven Mountain and Brush Mountain, which have elevations of 1,800 to 1,900 feet (550 to 580 m), are in the watershed. The Rapid Run Gorge is located in the watershed of Rapid Run, just south of Halfway Lake. In the gorge, all five of the rock formations that make up the area's mountains occur: the Reedsville Formation, the Bald Eagle Formation, the Juniata Formation, the Tuscarora Formation, and the Rose Hill Formation.

In the water gap of Rapid Run, a number of sedimentary rock formations are exposed along Pennsylvania Route 192. These rock formations mainly consist of shales, sandstones, and conglomeratic sandstones that date to the Ordivician and Silurian periods. The strata in the stream's water gap are all inclined to the southeast. Jökulhlaup surfaces with a length of more than 6 kilometers (3.7 mi) and up to 1.2 kilometers (0.75 mi) wide occur in the vicinity of Rapid Run. There also used to be an ice-dammed lake near the stream. This ice-dammed lake was the largest in the area, with a volume of 0.973 cubic kilometers (0.233 cu mi). It had an area of 6.61 square kilometers (2.55 sq mi) and a depth of 90 meters (300 ft). 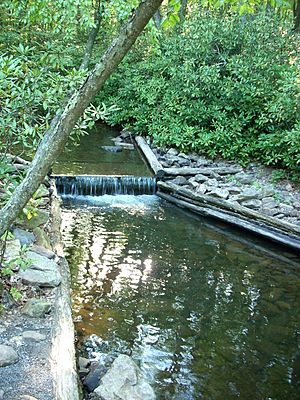 The watershed of Rapid Run has an area of 18.7 square miles (48 km2). The mouth of the stream is in the United States Geological Survey quadrangle of Mifflinburg. However, its source is in the quadrangle of Hartleton. The stream is one of the major tributaries to Buffalo Creek. Its watershed makes up 14 percent of the Buffalo Creek drainage basin. There are a total of 30.0 miles (48.3 km) of streams in the watershed, of which 3.0 miles (4.8 km) are on agricultural land.

A total of 88 percent of the watershed of Rapid Run is on forested land. Another 7 percent is on agricultural land and 2 percent is on impervious surfaces. However, the portion of land on impervious surfaces could rise to 7 percent in the future. The only part of the watershed where agricultural land is predominant is the area in the vicinity of the stream's impaired tributary. The main stem and all of its other tributaries are on forested land. There are 28 acres (11 ha) of no-till conversions in the watershed.

The agricultural land in the watershed of Rapid Run includes 544 acres (220 ha) of row crops and 482 acres (195 ha) of hay and pastures. A total of 242 acres (98 ha) of agricultural land is on slopes of more than 3 percent. The watershed contains 1.0 mile (1.6 km) of unpaved roads. The headwaters of the stream are in a swampy area.

Pennsylvania Route 192 runs alongside Rapid run for much of its length. For this reason, access to the stream is easy. 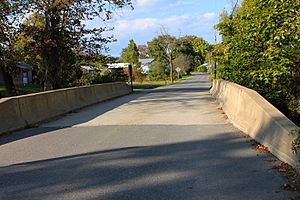 Bridge over Rapid Run near Cowan

Daniel Reish of Berks County, Pennsylvania settled in the vicinity of Rapid Run in Forest Hill in 1820 and constructed a sawmill, gristmill, and distillery. In the 1920s and 1930s, some people used dynamite to capture fish in Rapid Run. When the logging industry in the area was active, a log dam and a sawmill were constructed on the stream where Halfway Lake currently is. The first stone dam ever built by the Civilian Conservation Corps impounds Halfway Lake on Rapid Run.

The Pennsylvania American Water Company historically owned lands along Rapid Run and considered using the stream as a water supply. However, they eventually sold the land. There are 1,009 feet (308 m) of field lane improvement projects in the watershed. In a 2008 report, the watershed of Rapid Run was ranked fifth amongst sub-watersheds in the Buffalo Creek drainage basin for restoration priority.

The drainage basin of Rapid Run is designated as a High-Quality Coldwater Fishery and a Migratory Fishery. Wild trout naturally reproduce in the stream from its headwaters downstream to its mouth. It is considered by the Pennsylvania Fish and Boat Commission to be Class A Wild Trout Waters for brown trout from Buffalo Trail downstream to T-383, a distance of 4.5 miles (7.2 km). Brook trout also inhabit the stream. It has also been stocked with fish.

Rapid Run has a population of benthic macroinvertebrates that has been described as "healthy". Additionally, a freshwater sponge known as Spongilla fragilis has been observed in the stream, but only near the Halfway Dam. It is likely that physical factors, as opposed to chemical ones, restrict their range. In 2012, the Pennsylvania Fish and Boat Commission found two eels in Rapid Run, approximately 12 miles (19 km) upstream of any eel stocking locations. The eels were between 280 and 330 millimeters (11 and 13 in) in length.

There is a second-growth forest consisting mainly of pine and hemlock. The forest has been described as "pristine".

Rapid Run has been described as a "high quality" stream with "excellent" angling opportunities. The headwaters of the stream are in Bald Eagle State Forest. A reach of it is in R.B. Winter State Park and another reach is in Sand Bridge State Park. A hiking trail in the latter park also crosses the stream.

According to Mike Sanja's 1988 book Pennsylvania Trout & Salmon Fishing Guide, the best fishing on Rapid Run is in its lower 1.1 miles (1.8 km).

All content from Kiddle encyclopedia articles (including the article images and facts) can be freely used under Attribution-ShareAlike license, unless stated otherwise. Cite this article:
Rapid Run (Buffalo Creek tributary) Facts for Kids. Kiddle Encyclopedia.