Blacksburg is a small town in Cherokee County, South Carolina, United States. The population was 1,848 at the 2010 census. The communities of Cherokee Falls, Kings Creek, Cashion Crossroads, Buffalo, and Mount Paran are located near the town.

Blacksburg is in Upstate South Carolina on the Interstate 85 corridor about 45 mi (72 km) southwest of Charlotte, North Carolina. It is part of the Greenville-Spartanburg-Anderson Combined Statistical Area (CSA) which has a population of 1,173,433 according to 2004 estimates by the U.S. Census Bureau.

Located near the northern border of the state, the present-day site of Blacksburg was first settled by a man named Stark. Mr. Stark, who had lived in Charleston, South Carolina prior to moving to the area, had gotten several people to come along with him on an agriculture venture, but this venture would fail. Those who stayed behind named the area "Stark's Folly". 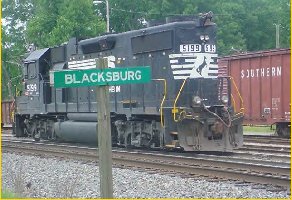 The railroad played a major role in the history of Blacksburg.

In the late 19th century the Black family, headed by John G. Black, a Confederate veteran, was living in the area and persuaded the C.C. & C. Railroad Company to lay track through the town and build a depot. The town soon became known as "Black's Station" in honor of John G. Black and was renamed "Blacksburg" in 1888.

Major John F. Jones of Massachusetts came to live in Blacksburg when hired as superintendent of the C. C. & C. Railroad. He donated his own money to build a school, hotel (the Cherokee Inn), and several other buildings in Blacksburg. He lived in Blacksburg until 1922, when he was appointed the South Carolina Internal Revenue Collector by the President of the United States.

In the 1890s large amounts of iron ore were found in the area, and many people hoping to make a fortune from mining it flocked to the town. Blacksburg became a boom town, and hotels and saloons were built for the new visitors. The town went by the name "Iron City" for a short time. Because of the "iron rush" the town became quite wealthy. It installed the first electric street lights in Upstate South Carolina and perhaps in the entire state. The city was incorporated in 1888 as "Blacksburg" but still holds the nickname of "Iron City".

The Kings Mountain State Park Historic District was listed on the National Register of Historic Places in 2008.

According to the United States Census Bureau, the town has a total area of 1.87 square miles (4.85 km2), all of it land.

Whitaker Mountain is partially in the northern corner of the town, with a summit elevation outside the town limits of around 1,169 ft (356 m).

There were 785 households out of which 31.0% had children under the age of 18 living with them, 40.3% were married couples living together, 19.5% had a female householder with no husband present, and 35.8% were non-families. 32.6% of all households were made up of individuals and 16.3% had someone living alone who was 65 years of age or older. The average household size was 2.39 and the average family size was 3.04.

All content from Kiddle encyclopedia articles (including the article images and facts) can be freely used under Attribution-ShareAlike license, unless stated otherwise. Cite this article:
Blacksburg, South Carolina Facts for Kids. Kiddle Encyclopedia.