Shelby is a city in and the county seat of Cleveland County, North Carolina, United States. It lies near the western edge of the Charlotte combined statistical area. The population was 20,323 at the 2010 census.

Shelby is located in south-central Cleveland County. U.S. 74, a four-lane highway, runs through the city south of the center, and leads east 21 miles (34 km) to Gastonia and west 27 miles (43 km) to Rutherfordton.

Shelby is served by US Highway 74 and its business route. US 74 Business travels through uptown Shelby along Marion St. and Warren St., giving travelers access to Shelby's growing central business district. Currently, a controlled-access highway (signed as US 74) is under construction from Mooresboro to Kings Mountain, which will bypass Shelby to the north. Upon completion of the project, Charlotte and Asheville will be connected by virtually uninterrupted freeway via Interstate 85, US Highway 74, and Interstate 26.

Shelby-Cleveland County Regional Airport serves the city and county. The airport is used mostly for general aviation and is owned by the city of Shelby. Commercial air service is provided within a 2-hour drive at Charlotte (CLT), Asheville (AVL), Concord (USA) and Greenville/Spartanburg (GSP). 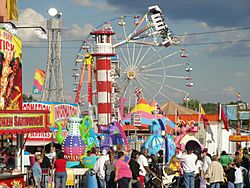 The Cleveland County Fair in 2010

The Don Gibson Theater in Uptown Shelby is named for country musician and Shelby native Don Gibson (see notable people section below). The theater occupies a former movie theater that has been converted to a venue for live music performances

The City of Shelby Parks and Recreation Department has something for all to enjoy and has for over 60 years. City Park spans 150 acres with beautifully kept ball fields, playgrounds, picnic areas, an aquatics center, a nine-hole golf course, miles of paved walking trails, horseshoe pits, and a sitting garden. There is also a Community Center with a 1,500 seat gymnasium with a stage. In addition City Park is home to the Historic Herchell Spillman Carousel and Gift Shop and restored Rotary Miniature Train. Over 800,000 people visit Shelby City Park annually.

Newgrass Brewing Company opened on August 8th, 2015. This brewery features hop-forward and Belgian-style beers that are complimented by an in-house kitchen that specializes in southern takes on high-end pub food. It is also a music venue and is dedicated to the progressive bluegrass movement kicked off by Earl Scruggs and his progenitors known as "Newgrass."

A fictionalized version of the city is the setting of HBO comedy show Eastbound & Down. Filmed in Wilmington, North Carolina, it bears little geographic or cultural resemblance to the real place. Actor and writer Danny McBride chose the location as an inspiration because of its size, attitude, and name.

In the 10th episode of the TV show Make It or Break It, Shelby is mentioned as being the location of Lauren Tanner's mother.

On the 41st episode of the TV show Bizarre Foods with Andrew Zimmern, the host travels to the annual Livermush festival in Shelby.

All content from Kiddle encyclopedia articles (including the article images and facts) can be freely used under Attribution-ShareAlike license, unless stated otherwise. Cite this article:
Shelby, North Carolina Facts for Kids. Kiddle Encyclopedia.