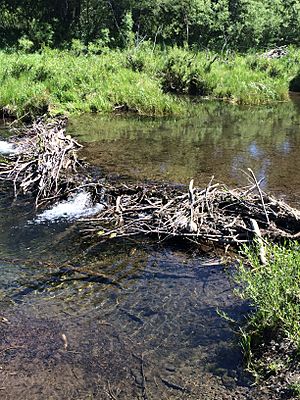 Beaver dam on Blackwood Creek apparently broken by vandals. Beaver dams are easily crossed by trout and may serve as critical breaks for wildfires.

Blackwood Creek (Washo: dogásliʔ), is a 8-mile-long (13 km) eastward-flowing stream originating on the southwest flank of Ellis Peak in the Sierra Nevada. The creek flows into Lake Tahoe 4.2 miles (6.8 km) south of Tahoe City, California, between the unincorporated communities of Idlewild and Tahoe Pines in Placer County, California, United States.

Blackwood Creek was named for early settler, miner and fisherman Hampton Craig Blackwood, who settled at the creek's mouth in 1866. The area was heavily grazed and logged into the 1970s. "Blackwood Pass" at the head of the creek is named on the Wheeler Survey Report of 1876-1877.

Historically, Blackwood Creek once hosted native Lahontan cutthroat trout (Oncorhynchus clarki henshawi) and other native fishes and was almost as important as the Upper Truckee River to the Washoe as a fishery. It is now a critical spawning stream for Lake Tahoe's non-native rainbow trout (Oncorhynchus mykiss).

Recent evidence has shown that beaver (Castor canadensis) are native to the Sierra Nevada. Their dams do not appear to pose barriers to trout passage.

All content from Kiddle encyclopedia articles (including the article images and facts) can be freely used under Attribution-ShareAlike license, unless stated otherwise. Cite this article:
Blackwood Creek (California) Facts for Kids. Kiddle Encyclopedia.