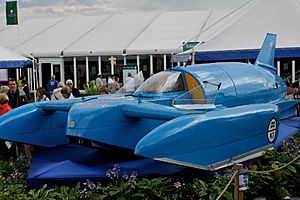 A replica of Bluebird K7

Bluebird K7 was a boat built for Donald Campbell to break the World Water Speed Record. Bluebird was a special kind of boat, called a hydroplane, that skims over the top of the water instead of pushing through it like a normal boat. Bluebird was powered by a jet engine. It set new world water speed records seven times; the fastest was 276 mph (445 km/h). Bluebird was destroyed when Campbell tried to set an eighth record by going faster than 300 mph (480 km/h) on Coniston Water in 1967. 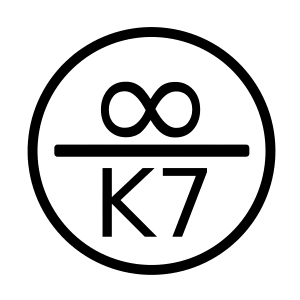 Campbell had been using his father's boat, Bluebird K4, to try and set new records. Bluebird K4 was destroyed when its structure broke. After this, Donald had the idea for a jet powered hydroplane to take the world water speed record from the American propeller hydroplane Slo-mo-shun. Ken and Lewis Norris designed and built K7 based on Donald's ideas.

K7 was a three-point hydroplane, meaning that when going quickly the boat only touched the water in three places, one point near the back of the boat and one point at the back of the two sponsons (the sponsons are the floats either side of the boat, near its front in the photos). It was built of aluminium on top of a steel frame and was at first powered by a small turbojet. 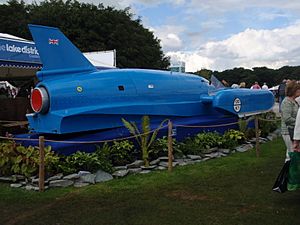 Bluebird's old engine was not strong enough to make it go this fast, so it was replaced with a more powerful Bristol Siddeley Orpheus engine taken from an old fighter jet. Many other changes were made, the tail fin from the fighter was attached to Bluebird's rear, the cover over the cockpit was changed to push through the air more easily, and the floats at the front were also changed. Bluebird was taken to Coniston Water to be tested in 1966. The tests did not go well, the weather was too bad to test the boat while moving, so it was tied down and tested without moving instead. When testing the engine it sucked in too much air and caused parts of the boat to break. The engine was broken when the broken parts were sucked into it. This meant that the entire engine had to be replaced.

At the end of November the weather was good enough for some test runs, but the speed was a lot lower than Bluebird's old records. The fuel pumps could not pump enough fuel to the engine so it could not run at full speed. The problem was fixed by fitting two fuel pumps instead of one.

On 4 January 1967, the problems had all been fixed, the weather was good and Campbell decided he wanted to try and break the speed record. For a world record to be official, a boat trying to set a record has to make two runs at full speed that are timed by people who are not part of the record breaking team. The official speed is the average speed of the two runs. On the first run Bluebird's speed was 297.6 mph (478.9 km/h) which was fast enough to be a new record, but not quite as fast as Campbell wanted to go. To set a record of more than 300 mph the second run would have to be 302.5 mph or faster.

The plan for the world record attempt was for Bluebird to stop at the far end of the lake and refuel from another boat that had been put there for that purpose. Taking time to refuel would also give the lake, which had been disturbed by the first run, time to settle down again. On the actual record attempt, Campbell decided not to refuel and instead started on his second run immediately. Why he did this is unknown.

At the start of the second run, Bluebird was going faster than 320 mph (510 km/h) and would have easily broken the 300 mph target, but as the boat travelled along the lake it started tramping (which means rocking from side to side). Bluebird hit a wave made on the lake from its own first run and the boat spun out of the water. When it hit the water again it broke into pieces and sank. Donald Campbell was killed in the crash. His teddy bear mascot was found floating in the lake later on but Campbell's body could not be found.

In 2001 a diver called Bill Smith led a salvage team which found Bluebird on the bottom of Coniston Water, and later lifted the wreck back to dry land. The wreck was taken apart carefully to keep it from rusting and is now being put back together again. There was a lot of damage caused in the crash but it can all be repaired. Bill Smith also got a new engine for Bluebird and hopes to return the boat to full working order.

Donald Campbell's body was also found in 2001. He was buried on 12th September 2001 in Coniston cemetery.

On Thursday 7 December 2006, Gina Campbell, Donald's daughter, formally gifted the recovered wreckage of Bluebird K7 to the Ruskin Museum in Coniston on behalf of the Campbell Family Heritage Trust. In agreement with the Campbell Family Heritage Trust and the museum, Bill Smith is to organise the restoration of the boat, which is now under way.[9] The intention is to rebuild K7 back to running order circa 4 January 1967. Gina Campbell commented: "I've decided to secure the future of Bluebird for the people of Coniston, the Ruskin Museum and the people of the world".

All content from Kiddle encyclopedia articles (including the article images and facts) can be freely used under Attribution-ShareAlike license, unless stated otherwise. Cite this article:
Bluebird K7 Facts for Kids. Kiddle Encyclopedia.