Image from early childhood, Božidar with his sister Paraskeva.

He was born in Prokuplje to father Krsta, a farmer (1892–1968), and mother Vidosava, a housewife (1896–1971). After completing primary school in 1947, self-taught, he began playing the clarinet. In 1950 he came to Belgrade, where he started studying the English language at the Faculty of Philology. At the same time, he worked at the National Orchestra of Radio Television Belgrade, which was then led by the famous Vlastimir Pavlović Carevac. Since that year, he has launched into a successful music career. The same 1950 he passed I preparatory class at the School of Music Josip Slavenski in Belgrade, under professor Franjo Partlić, and automatically entered the second grade. He became a member of the sextet Duško Radetić in Radio Belgrade from its founding in 1951.

In 1951 music editor of Radio Belgrade, Djordje Karaklajić, formed the Great National Orchestra RTB and was its principal conductor. He arranged the Yugoslav folk melodies in a serious way. The Orchestra was also conducted by Dušan Skovran, a rector of the Music Academy in Belgrade, and Djura Jakšić, a headmaster of the Music School Slavenski in Belgrade. He regularly performed in this Orchestra. 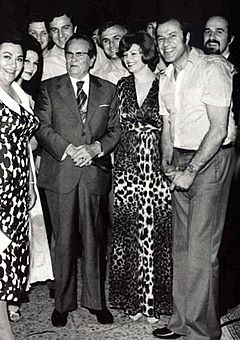 Božidar Milošević had played regularly for 30 years to President Josip Broz Tito and Jovanka Broz, as well as to statesmen from all over the world who made official visits to the President. He played to them at: Brijuni, The White Palace, The Federal Executive Council, Bled, The Old Palace...

From 1952 to 1956 he continued musical education in the High Music School Slavenski under the mentorship of professor Franjo Partlić. During the period of 1955–1958, he used to play in the String Orchestra RTB under the direction of Ilija Genić – Baćka.

After the death of Carevac in 1956, the violinist Rade Jašarević Rade Jašarević was appointed as the new head of the National Orchestra of Radio Television Belgrade. Božidar Boki Milošević was still playing in the Orchestra as a soloist on the clarinet.

From 1956 to 1960 he studied at the Music Academy in Belgrade with the first generation of clarinetists (Ernest Ačkun, Mihailo Živanović, Milenko Stefanovic and Božidar Milošević) in the class of the renowned professor Bruno Brun. Then, under the mentorship of professor Bruno Brun, entered postgraduate studies (1960–1963). From 1960 to 1966 he was engaged in teaching, working as a professor of clarinet at the Music School Slavenski which was a part of the Music Academy in Belgrade. In 1966 he moved to Belgrade Philharmonic Orchestra and became its member and soloist.

After the death of the violinist Rade Jašareviđ in a car accident, Bozidar Milošević had become 1976 the head of the famous National Orchestra of Radio Television Belgrade and worked there until his retirement in 1980. He had been an instrumental soloist of the orchestra for 30 years.

As a soloist performer, he had tours and concerts all over the world. In the 1950s in Israel, London, Vienna, Berlin, across the United States, Colombia, Guatemala, Canada, Mexico and ... Touring the Soviet Union in 1971, he visited more than half of the Soviet Union. There he composed his first composition Vlaska storm. 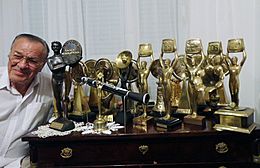 Prof. and Magister Božidar Milošević with his many trophies won by a hard, dedicated and devoted work during 65 year companionship with the clarinet.

All content from Kiddle encyclopedia articles (including the article images and facts) can be freely used under Attribution-ShareAlike license, unless stated otherwise. Cite this article:
Božidar Boki Milošević Facts for Kids. Kiddle Encyclopedia.