Kids Encyclopedia Facts
This page is about the original Southern California franchise of the larger Big Boy system. For the Big Boy chain as a whole, see Big Boy Restaurants. 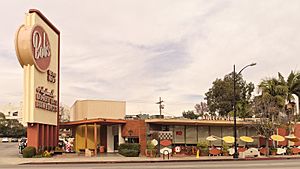 Bob's Big Boy is a restaurant chain founded by Bob Wian in Southern California in 1936, originally named Bob's Pantry. It is now part of Big Boy Restaurant Group, the current primary trademark owner and franchisor of the Big Boy system. At its peak in 1989, there were over 240 Bob's locations throughout the United States, most belonging to Marriott. By August 2019, only five Bob's Big Boy Restaurants remain in operation, all in Southern California. Those five locations are in Burbank (Toluca Lake), Calimesa, Downey, Norco, and Northridge. Two of these restaurants are now protected historic landmarks: the Burbank location on Riverside Drive and the Downey location, previously known as Johnie's Broiler. In August 2020, plans were announced to open a Bob's Big Boy in Indian Springs, Nevada. The restaurant opened on November 8, 2020 as Big Boy without the Bob's branding, with future expansion planned across Southern Nevada.

The restaurant is named after Wian and the Big Boy hamburger, which he created six months after opening his original location. Slicing a bun into three slices and adding two hamburger patties, Wian had created the original double-deck hamburger.

Short history of the chain 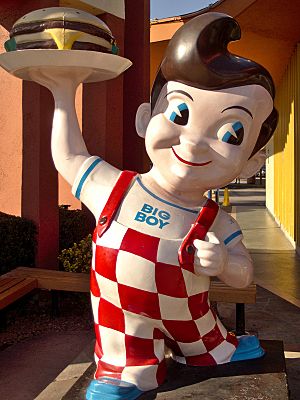 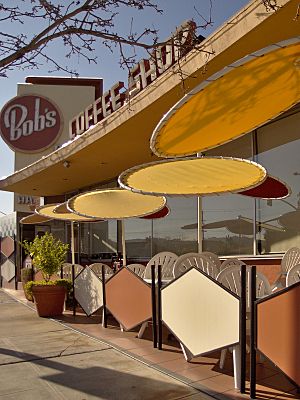 The Bob's Big Boy Restaurant located at 4211 Riverside Drive in Burbank, California, is the oldest remaining Bob's Big Boy in the United States. Built in 1949 by local residents Scott MacDonald and Ward Albert, it was designed by noted Los Angeles architect Wayne McAllister, "incorporating the 1940s transitional design of streamline moderne style, while anticipating the freeform 1950s coffee shop architecture. The towering Bob's sign is an integral part of the building design and its most prominent feature." The building is said to have "made McAllister's reputation," and he is credited with creating the restaurant's circular drive-through design.

The restaurant was designated a California Point of Historical Interest in 1993. McAllister worked to preserve the structure as a historic landmark. McAllister was also the architect for the original Lawry's restaurant on La Cienega Boulevard in Beverly Hills, and the original Sands Hotel casino and Desert Inn casino in Las Vegas. He designed some 40 coffee shops in the Los Angeles area in the late 1940s, and each with a distinctive look. Creative coffee shop designs started in Los Angeles because of the popularity of automobiles, and then spread across the nation.

The design of the Toluca Lake Bob's represents a distinct period in the region's architectural history, a style often referred to as Googie architecture. The building features a curving windowed facade and expansive roof overhangs with 1950s "free-form" style of cantilevered roofs and tall display signs.

The Riverside Drive Bob's Big Boy was designed as a drive-in, in which carhops brought food to the cars, and now operates a drive-thru window. In 1993, the tower sign was renovated, the dining room updated and an outdoor dining area added. Carhop service was reintroduced on weekends and a weekly classic car show is hosted in the parking lot.

Bob Hope and other movie personalities such as Mickey Rooney, Debbie Reynolds, Jonathan Winters, Dana Andrews, Martha Raye, Alexis Smith and Craig Stevens, were once regulars at the restaurant. Hope frequented the Burbank drive-in because it afforded him privacy.

Famed British musical group The Beatles dined at the Burbank location during their 1965 U.S. Tour. The table is the last booth on the right as one walks in, where the end of the windows facing out towards Riverside Drive's stop. For many years a plaque described the event; the plaque has been stolen many times by fans, and has been replaced each time. Many regulars to the restaurant call this table and booth "The Beatles Booth."

All content from Kiddle encyclopedia articles (including the article images and facts) can be freely used under Attribution-ShareAlike license, unless stated otherwise. Cite this article:
Bob's Big Boy Facts for Kids. Kiddle Encyclopedia.