Bogus is operated by the Bogus Basin Recreation Association, a non-profit organization, on private and leased land in the Boise National Forest. Ski season generally runs from Thanksgiving weekend until the weekend preceding April 15, depending on snow conditions. The area also has cross-country skiing on 23 miles (37 km) of Nordic trails.

The area probably got its name during the 19th-century gold rush. Crooks in the hills above Boise City, known as "spelterers", would make bogus gold dust by heating lead filings with a bit of real gold dust.

On the front side, Bogus Basin's southern lift-served summit is at "Doe Point," adjacent to Deer Point, which is slightly higher and covered with communications towers at an elevation of 7,070 feet (2,155 m). Both vantage points overlook Boise and the entire Treasure Valley, over 4,000 vertical feet (1,220 m) below. Bogus' base area and main day lodge (J. R. Simplot Lodge, formerly Bogus Creek) are at 6,150 ft (1,875 m), at the base of the north-facing slopes served by the Deer Point Express (#1), a high speed quad installed in the summer of 1996. The original double chairlift on #1 was installed in 1959 and upgraded in 1981. Showcase (#4), a double chairlift that had replaced a surface poma lift in 1972, is east of and parallel with the Deer Point Express. The original Deer Point lift was relocated and renamed Coach (#7) in 1996, servicing the beginner learning area. It honors Bill "Coach" Everts, an early area manager (1953–58) and longtime director.

At mid-mountain, a second day lodge (Pioneer Lodge - 1973) sits at 6,800 feet (2,070 m) with a sizable parking lot, a cluster of condominia (1975), and the Jason Harper Training Center. From this Pioneer area, there is direct access to the gentle south-facing slopes served by a high speed quad chairlift, Morning Star (#2) and the north-facing slopes of the Bitterroot (#5), a double chair lift (vertical: 525 ft (160 m)), which runs only on weekends and holidays. In addition, there is connecting trail access to the base of the Superior Express (#3) lift. With its 1,500-foot (457 m) vertical rise, the Superior Express serves the advanced and expert terrain on the northern face of Shafer Butte, unloading at 7,480 feet (2,280 m). It replaced a Riblet double chairlift built in 1965, and cut the ride time of the original lift in half. Night skiing was added to the Superior area with the installation of lights in the summer of 1986, and Morning Star was converted from a double to a triple chairlift in 1999.

Historically, Bogus Basin's average annual snowfall is 200–250 inches (510–640 cm), but since 2011, the snowfall has been well below average. Due to limited water resources, there is no significant snow making, only small portable units for patching. Night skiing is available on 165 acres (0.67 km2) on runs served by five of the chairlifts (none on #5 or #6). Three terrain parks are also available; two on the Deer Point mountain, one for advanced, the other for beginner to intermediate skill levels. The Sunshine Park is located on the Morning Star side of the mountain.

The main day lodge at Bogus Creek was built in 1962 and expanded in 1991; its ground floor contains the ticket office and ski lockers. In 2002 it was named for agribusiness magnate J. R. Simplot (1909–2008), because without him there might not be a Bogus Basin. When the fledgling ski area was struggling to pay its debts in 1953, Simplot bought its ski lifts and other mountain improvements from the Kingcliffe Co. and leased them back to the Bogus Basin Recreational Association for $1,500 per year for ten years. His intervention averted almost certain financial demise and won the everlasting gratitude of a generation of skiers. Simplot was later the driving force behind Brundage Mountain northwest of McCall, which opened in November 1961.

The GoldRush Tubing Hill opened in the fall of 2003, constructed just west of the main parking lot for about $100,000. Annual revenues from the hill were expected to be four to five times that figure; revenues for its fourth season (2006–07) were just under $140,000.

The Glade Runner is a year-round operating mountain coaster that opened in November 2017. The base station was constructed a few yards from the J. R. Simplot Lodge, and the mountain coaster features 4,330 feet (1,320 m) of track.

Bogus is accessed by Bogus Basin Road (an extension of Harrison Boulevard), which twists 16 miles (26 km) from the Boise city limits to the resort, only ten miles (16 km) NNE as the crow flies.

The two-lane road turns 172 times and gains 3,400 feet (1,040 m) in elevation as the terrain changes from dry sagebrush foothills to snow-laden mountain forest. Originally a gravel road constructed by CCC crews (funded by the WPA) from 1938–40, Bogus Basin Road was first paved in 1962 and improved in 1998. Before its paving, it was a one-way road in ski season, with the direction changed to downhill in the early afternoon. 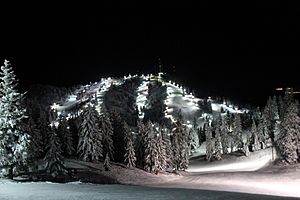 Seniors (age 70 and over) skied for free at Bogus through March 2015; the policy was changed that summer. For the 2015–16 season, season passes for seniors were priced at $199 and one-day lift tickets at $44, a discount of ten dollars off the regular daily rate.

Members of the U.S. Ski Team from Bogus Basin include:

After 21 seasons, Mike Shirley announced in February 2012 that he was stepping down as general manager and president, and was succeeded by Alan Moore, the former vice president of finance. Shirley was a former vice president with Morrison-Knudsen Co. and initially hired as an interim manager after the resignation of Terry Lofsvold in November 1991. After the search committee determined he was the best candidate, he was hired in April, the first general manager at Bogus with an extensive background in finance.

Moore stepped down in 2015 and was succeeded in November by Brad Wilson, formerly the general manager at Diamond Peak, Nevada, at northeast Lake Tahoe.

All content from Kiddle encyclopedia articles (including the article images and facts) can be freely used under Attribution-ShareAlike license, unless stated otherwise. Cite this article:
Bogus Basin Facts for Kids. Kiddle Encyclopedia.