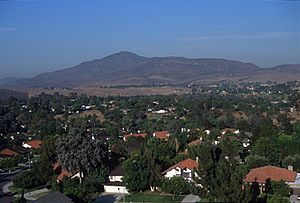 Bonita is a census-designated place (CDP) in southern San Diego County, California, nestled between the cities of Chula Vista, National City, and San Diego. The population was 12,538 at the 2010 census.

While Bonita is politically designated as an unincorporated community, bounded by the incorporated cities of Chula Vista, San Diego and National City, it is closely associated with the geography of the Lower Sweetwater Valley. Thus considered, Bonita occupies about a five-mile (8 km) stretch of the Sweetwater River, its valley, and surrounding hills on either side, bounded upstream (east) by the Sweetwater Reservoir, and downstream (west) effectively by Interstate 805. The community crosses west of I-805—an area less than 160 acres (0.65 km2)—reaching as far south and west as East H Street and Hilltop Drive. Its northern boundary is State Route 54 and its southern extent reaches approximately one mile (2 km) south of the river.

Large portions of modern Bonita consist of housing tracts built throughout the 1960s, 1970s, and 1980s, including:

The Bonita area is populated by coyote, racoon, fox, rabbits, squirrels, bobcats, opossum, and skunk, among other wildlife.

The word Bonita is a feminine word for "beautiful" in the Spanish language. It was the name of a ranch owned by Henry Ernest Cooper, Sr. in 1884, and was used by the nearby post office. The ranch itself was used to cultivate lemons, which were first grown in the area beginning in 1871. During the early years lemon industry was thriving, where it became the originator of the Bonnie Brae Lemon variety, named after the first lemon ranch in the community.

In 1888, the Sweetwater Dam was built, creating the Sweetwater Reservoir and forever changing the geography of the region. Soon after, in 1906, the dam broke as a result of extensive rains which overfilled the reservoir, and the Lower Sweetwater Valley was completely flooded.

Bonita has experienced minor flooding throughout history, generally as a result of high seasonal rains attributed to El Niño. The floods most affect the Central Avenue river crossing, as no bridge has ever been built, unlike the Bonita Road and Willow Road crossings which are bridges, the former of which was rebuilt in the late 1990s.

In the 1990s and 2000s, the development of State Route 125 (The South Bay Expressway) became a major issue to Bonita residents, much as Interstate 805 and State Route 54 did during their development. Opponents argued that Bonita's rural nature would be compromised without benefit while proponents argued that the highway would reduce the significant increase in surface-street car traffic the community had seen since the 1980s when the eastern Chula Vista communities surrounding Eastlake were developed. The tollway opened in November 2007, and sought Chapter 11 bankruptcy on March 22, 2010 when the cost of litigation over construction of the road threatened to overwhelm its ability to operate and pay off its loans. On April 14, 2011, South Bay Expressway LP emerged from bankruptcy and in a closed session on July 29, 2011, the SANDAG board of directors voted to purchase the lease to operate the state Route 125 toll road for approximately $345 million.

In 2007, Glen Abbey Memorial Park was declared a historic district, having been designed by architects who also worked on Balboa Park, and other landscapes and architectures that are significant to the history of San Diego. It is one of only three historic districts in unincorporated San Diego County.

The Bonita Historical Museum is the principal repository of historical information for the Lower Sweetwater Valley.

The climate in Bonita is a combination of the coastal and inland valley climates of San Diego County : warmer (and sunnier during the May Gray and June Gloom periods) than areas directly adjacent to San Diego Bay or the coast, but not as hot as communities in inland valleys such as El Cajon, or even nearby Spring Valley. In summer, Bonita's climate is pleasant. 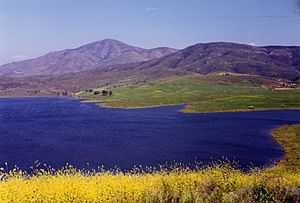 Bonita is considered a rural and equestrian enclave in the middle of suburbia.

To visitors and residents alike, one of the most visible features of Bonita recreational life is the walking trail which loops the Chula Vista Municipal Golf Course in central Bonita. Hundreds of residents walk, run, and ride this trail every day for pleasure and fitness, and the trail has become a vital component of Bonita life for many residents. During El Nino years, this golf course and surrounding walking trails have flooded, closing the golf course and preventing many residents from using the walking trails.

In the late 1990s the Sweetwater Regional Park was expanded and significantly improved, extending the walking and equestrian trails to an even greater number, and introducing a camping area at Summit Meadow Road. Now, virtually the entire valley from the reservoir to I-805 formally serve recreational purposes as either park or golf course. Sweetwater County Park, at the intersection of Briarwood Road and Sweetwater Road, is a wildlife preserve with a small pond that supports some fishing.

Equestrianism has long been a part of the Bonita community, and many trails exist throughout the Lower Sweetwater Valley. There are a number of connections to trails external to Bonita as well. In fact many residents still keep their own horses and can be seen riding the trails regularly. The Bonita Valley Trails organization monitors and supports the network of trails throughout the valley.

Bonitafest is an annual community event, held in early autumn, highlighted by a parade and street fair along Bonita Road which includes crafts, music, entertainment, and food. The Kiwanis Club hosts a Bonitafest Golf Tournament in conjunction with this event. At this time, there is also an annual community play called the Bonitafest Melodrama, co founded by Max Branscomb in the 1970s. In 2008, Bonita did not have enough funds to pay for traffic police to redirect traffic during the parade, so no parade was held during the Bonitafest.

There were 4,179 households out of which 35.3% had children under the age of 18 living with them, 66.4% were married couples living together, 10.9% had a female householder with no husband present, and 18.7% were non-families. 14.0% of all households were made up of individuals and 5.3% had someone living alone who was 65 years of age or older. The average household size was 2.94 and the average family size was 3.22.

Like many communities in the Southwestern United States, Bonita could go through the process of hispanicization. According to 2008 SANDAG estimates, between 2000 and 2008, the number of Whites in Bonita went down 8%, and the number of Blacks went down 17%. At the same time, Hispanic population in the community grew by 26%. Hispanics now constitute the majority of population of Bonita in all age cohorts under 40; they are far outnumbered (by a factor of 2 or more) in age cohorts over 50.

All content from Kiddle encyclopedia articles (including the article images and facts) can be freely used under Attribution-ShareAlike license, unless stated otherwise. Cite this article:
Bonita, California Facts for Kids. Kiddle Encyclopedia.