Booth Museum of Natural History is a municipally-owned museum of natural history in the city of Brighton and Hove in the South East of England. Its focus is on Victorian taxidermy especially of British birds, insects, as well as fossils, bones and skeletons. It is part of "Royal Pavilion & Museums, Brighton and Hove". Admission to the museum is free. 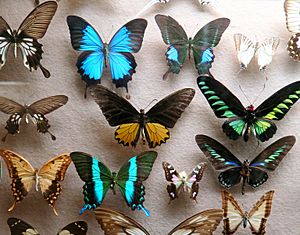 Butterflies exhibit in the museum

The Booth Museum was opened in 1874 by naturalist and collector Edward Thomas Booth. Booth was particularly interested in birds, and it was his ambition, though not fully realized, to collect examples of every bird species found in Britain. Each species collected would include a male, a female, a juvenile and any plumage variations. He presented his bird collection in Victorian-style dioramas that attempted to recreate how birds would appear in the setting of their natural habitat. Booth was one of the pioneers of such diorama displays, and his museum, the first to present its collection in this manner in Britain, influenced how other museums would present animal species in their displays.

Booth donated the museum to the city in 1890 with the proviso that the display of over 300 dioramas should not be altered, and it was opened under Brighton civic ownership in 1891. In 1971 the Booth became a Museum of Natural History.

The museum continues to feature the dioramas of British birds in their habitat settings, as well as collections of butterflies, and British fossils and animal bones. Other items have been added to the museum's collection through the years, and it is now home to a collection of 525,000 insects, 50,000 minerals and rocks, 30,000 plants and 5,000 microscopic slides.

Several of the exhibits were used as references for CGI animations in the 2019 television adaptation of the fantasy drama His Dark Materials. 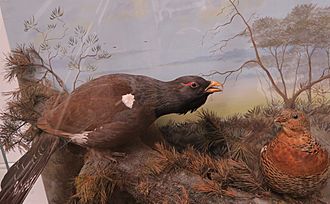 A bird diorama at the Booth Museum of Natural History

The museum's collection of taxidermied birds is one of the largest in the country. The museum also has some skeletons of mammal species, including primates, whale as well as extinct species such as dodo and woolly rhinoceros. Also included in the display are fossils and minerals. Insects displayed include over 650 types of butterfly. Victorian curiosities such as a hoax merman and a "Toad in the Hole" are also found in the museum.

All content from Kiddle encyclopedia articles (including the article images and facts) can be freely used under Attribution-ShareAlike license, unless stated otherwise. Cite this article:
Booth Museum of Natural History Facts for Kids. Kiddle Encyclopedia.