Kids Encyclopedia Facts
This page is about the Russian pianist. For the Russian businessman, see Boris Berezovsky. 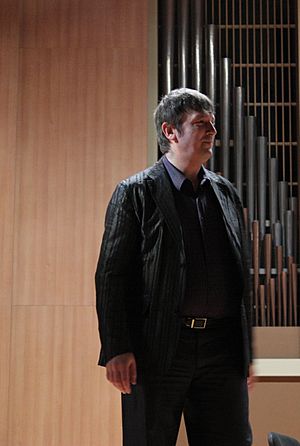 Boris Berezovsky during his concert in Tbilisi, Georgia

Boris Berezovsky (Russian: Бори́с Вади́мович Березо́вский; born Moscow, 4 January 1969) is a famous Russian pianist. Berezovsky studied at the Moscow Conservatory. In 1988 he became well known in the West when he gave a recital in the Wigmore Hall in London. Two years later he won the Gold Medal at the 1990 International Tchaikovsky Competition in Moscow.

Berezovsky has a daughter, Evelyne Berezovsky (born 1991), who is also a pianist. He now lives in Brussels. Boris is an excellent jazz pianist and performs with his trio in Russian clubs.

All content from Kiddle encyclopedia articles (including the article images and facts) can be freely used under Attribution-ShareAlike license, unless stated otherwise. Cite this article:
Boris Berezovsky (pianist) Facts for Kids. Kiddle Encyclopedia.