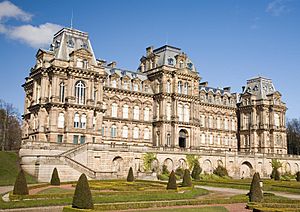 Bowes Museum
This page is about the museum in Barnard Castle, England. For the museum in Orange County, California, see Bowers Museum.

The Bowes Museum has a nationally renowned art collection and is situated in the town of Barnard Castle, Teesdale, County Durham, England.

The museum contains paintings by El Greco, Francisco Goya, Canaletto, Jean-Honoré Fragonard and François Boucher, together with a sizable collection of decorative art, ceramics, textiles, tapestries, clocks and costumes, as well as older items from local history. The early works of French glassmaker Émile Gallé were commissioned by Joséphine, wife of the founder John Bowes. A great attraction is the 18th-century Silver Swan automaton, which periodically preens itself, looks round and appears to catch and swallow a fish.

The Bowes Museum was purpose-built as a public art gallery for John Bowes and his wife Joséphine Benoîte Coffin-Chevallier, Countess of Montalbo, who both died before it opened in 1892. Bowes was the son of John Bowes, the 10th Earl of Strathmore and Kinghorne, although he did not inherit the title as he was deemed illegitimate under Scottish law. His grandmother was Mary Bowes, Countess of Strathmore and Kinghorne, a fascinating woman who forged a pioneering path for women's rights in relation to divorce.

It was designed with the collaboration of two architects, the French architect Jules Pellechet and John Edward Watson of Newcastle. The building is richly modelled, with large windows, engaged columns, projecting bays, and mansard roofs typical of the French Second Empire, set within landscaped gardens. An account in 1901 described it as "... some 500 feet in length by 50 feet high, and is designed in the French style of the First Empire. Its contents are priceless, consisting of unique Napoleon relics, splendid picture galleries, a collection of old china, not to be matched anywhere else in the world, jewels of incredible beauty and value; and, indeed, a wonderful and rare collection of art objects of every kind."

Among those with less favourable opinions was Nikolaus Pevsner, who considered it to be "... big, bold and incongruous, looking exactly like the town hall of a major provincial town in France. In scale it is just as gloriously inappropriate for the town to which it belongs (and to which it gives some international fame) as in style". 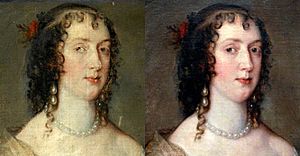 Portrait of Olivia Boteler Porter by Anthony van Dyck before and after restoration. The version on the left was the photograph originally posted to the Your Paintings website.

A major redevelopment of the Bowes Museum began in 2005. To date, improvements have been made to visitor facilities (shop, cafe and toilets); galleries (new Fashion & Textile gallery, Silver gallery and English Interiors gallery); and study/learning facilities. The three art galleries, on the second floor of the museum, were updated at the same time.

The BBC announced in 2013 that a Portrait of Olivia Boteler Porter was a previously unknown Anthony van Dyck painting. It had been found in the Bowes Museum storeroom by art historian Dr. Bendor Grosvenor who had observed it on-line at the Your Paintings web site. The painting itself was covered in layers of varnish and dirt, and had not been renovated. It was originally thought to be a copy, and valued at between £3,000 to £5,000. Christopher Brown, director of the Ashmolean Museum, confirmed it was a van Dyck after it had been restored.

All content from Kiddle encyclopedia articles (including the article images and facts) can be freely used under Attribution-ShareAlike license, unless stated otherwise. Cite this article:
Bowes Museum Facts for Kids. Kiddle Encyclopedia.