According to the United States Census Bureau, the town has a total area of 0.35 square miles (0.9 km2), all of it land.

The town is situated at the crossing of the Norfolk & Western Railway and the Winchester and Berry's Ferry Turnpike about 2 miles (3 km) northwest of Millwood, of which it is the shipping point; 3 miles (5 km) each from Old Chapel and White Post; and 9 miles (14 km) southeast of Winchester, Virginia. It is built upon a ridge, which drains on the east into Page Brook and to the west into Roseville Run. It is apparently well underlaid with water; the town well reaches to a recorded depth of 165 feet (50 m).

There were 159 households out of which 27.0% had children under the age of 18 living with them, 57.2% were married couples living together, 11.3% had a female householder with no husband present, and 28.3% were non-families. 25.2% of all households were made up of individuals and 10.1% had someone living alone who was 65 years of age or older. The average household size was 2.68 and the average family size was 3.19.

The town of Boyce was incorporated by the Circuit Court for the County of Clarke on the 28th day of November, 1910, with a recorded population of 312.

The first election for mayor and four councilmen was held on the 20 December 1910, at which W. M. Gaunt was elected Mayor and George W. Garvin, M. O. Simpson, J. T. Sprint and Geo. B. Harrison were elected Councilmen; and the Council duly organized on the 24th day of December, 1910, and elected Geo. B. Harrison, Recorder.

The Shenandoah Valley Railroad (known as the Norfolk and Western for many years, now known as the Norfolk Southern) was constructed in Clarke County in 1879. It started in Hagerstown, Maryland, and went south to Roanoke, Virginia. The railroad opened from Hagerstown to Berryville on October 1, 1879.

The town of Boyce, located 6 miles (10 km) southwest of Berryville, began in 1881 with the arrival of the Shenandoah Valley Railroad. Located at the railroad crossing with the Millwood Turnpike, Boyce remains much as it was in the early 20th century. The town was named after Colonel Upton L. Boyce, who lived at the nearby Tuleyries estate and who was very influential in persuading the railroad to pass through Clarke County.

Previous to the current railroad station, there was a much smaller one located on the same side of the tracks but right along the Millwood Turnpike. The railroad was apparently upgrading some of their railroad stations during the early 1910s and were going to replace the original station in Boyce. The new building was to be a small wooden one, and sit along the west side of the tracks at its intersection with the Millwood Turnpike. According to local tradition and some historical accounts, the citizens of Boyce (and neighboring Millwood) wanted a larger, more ornate building and also wanted it to be located on the east side of the tracks. They apparently raised money on their own and gave it to the Norfolk and Western to upgrade to a larger station.

A December 11, 1912, article in The Clarke Courier entitled "New Depot for Boyce" states:

"The public spirit of the citizens of Boyce has again scored a victory. Some time ago the N & W Railway Company announced that it would erect a new passenger station at Boyce.

"The plans submitted by the railway company did not entirely suit the Boyce people, and they at once started a movement to secure a better piece of ground in order that a more pretentious station might be erected.

"The old buildings have been removed from the Page-Manning lot, and work on a new and commodious passenger station, of concrete construction, will be started at once.

"This is the spirit which builds cities.

"The Boyce people are quick to go down in their pockets and contribute to any and every cause which will advance their town...." 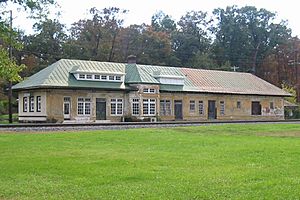 The train station was completed in late 1913. A November 26, 1913, article in The Clarke Courier states:

"The new N & W station, with fine concrete platforms, and promenade, long train shed, electric-lighted throughout, with all modern conveniences for the comfort of patrons, is a great addition to the town."

In a December 23, 1914, article in The Clarke Courier, entitled "The Hustling Town of Boyce," the railroad station is described:

"...water is now piped to the magnificent railroad station. The handsome railroad station of tile and concrete construction with its 400 feet (120 m) of train shed, and 540 feet (160 m) of concrete platform, with its 3 acres (12,000 m2) of grounds and tracks, is a noble response by the officials of the railway to the requests of our people, and furnishes ample railroad facilities."

In 1913, George B. Harrison, a town councilman, wrote about Boyce and described the train station in the following manner:

"The Norfolk and Western Railway in kind response to the request of the community has erected a magnificent station of latest design and material with spacious grounds and facilities, fully equipped and provided with electric light and water."

Undeniably, the Boyce train station is a surprisingly large building for a community the size of Boyce. It was much bigger than the Berryville (county seat) station, constructed at about the same time. The reason for such an elegant station can probably be attributed to the wealth of many of the local citizens around Boyce and Millwood. Early in the twentieth century, Clarke County experienced an influx of wealthy settlers from the west and north. They were drawn to the county because of the presence of fox hunting, cheap land, and good climate. Many purchased older homes and restored them. Horsebreeding and cattle raising became very popular. The local citizenry of Boyce and Millwood wanted a more elegant train station than what the N & W initially proposed, and they wanted it larger because they were transporting thoroughbreds and cattle on it.

The Boyce Railroad Station is thus an example of a rare instance where the citizens of the community wanted a larger and more pretentious facility than what the railroad company was willing to provide, and helped to fund the construction of the building themselves.

It appears that the N&W owned the building, although there is a metal sign on the central part of the station's polygonal bay that identifies its location as "H-461-A" and one that says "Not N&W". According to oral tradition, this means that the N & W did not own the building. However, when Mr. Kenneth Gilpin, Jr., purchased the building in the 1950s, he bought it from the Norfolk and Western. Since then the building has conveyed through several owners. The land on which the building sits, however, is still owned by the railway and is only leased to the owner of the building.

In recent years, several of the more substantial railroad stations on the Norfolk and Southern line in the Lower Shenandoah Valley have been demolished. The Boyce train station is thus one of a few surviving examples of a large and elegant station in this pan of Virginia. It is definitely the finest surviving one in Clarke County, as the Berryville station was demolished in the late 1980s. Not only is the Boyce train station a reminder of the influence of the railroad on this area, it is a testament to the hard work of the local citizens who partially paid for its construction.

The main street of the town is piped with water, and the fire department is located at the intersection of Main Street and US 340. In addition to the public well, the town owns the electric plant and a lot on the railway in the centre of the town, and has added thereto an alternating current plant with ninety kilowatt dynamo, so as to meet any possible demand for light or power; a switch will bring the coal to the power-house.

In 1914, the town contained an Episcopal and a Methodist church, and a Baptist parsonage (the Episcopal church being electrically lighted); a brick high school with seven teachers and an enrollment of about two hundred scholars; a brick bank with a capital of $15,000; a hotel and two livery stables; one pinning mill and two lumber yards; two grain elevators; nine stores-one being a department store; a butcher shop; a harness shop; and a barber shop. Adjoining the town is a large cattle plant, and the town is a large stock-shipping station. Including the then-incorporated town of Millwood, the population of the two towns was computed to be about eight or nine hundred. However, the large stone Episcopal Church complex has recently been deconsecrated and is currently being renovated, congregants traveling to the nearby churches including Christ Chapel in Millwood. The Baptist and Methodist (consecrated 1916) churches remain active.

Boyce is home to the annual Elysian Fields music gathering, located at Huntingdon Farm. Founded in 2008, Elysian Fields was created by "a group of friends who share a love for live music." The festival is "an annual celebration of life and the relationships that bring us happiness." Featured artists have included Keller Williams, The Bridge, Toubab Krewe, Larry Keel & Natural Bridge, and the DJ Williams Projekt among others.

All content from Kiddle encyclopedia articles (including the article images and facts) can be freely used under Attribution-ShareAlike license, unless stated otherwise. Cite this article:
Boyce, Virginia Facts for Kids. Kiddle Encyclopedia.