Boyne Island is a town and locality in Queensland, Australia, 25 kilometres (16 mi) south of Gladstone. It is part of the local government area of Gladstone Region. At the 2011 census, Boyne Island has a population of 4,406.

The town was named for the Boyne River, which was named by John Oxley in 1823. Originally the island was used for sheep grazing, this was followed by small crops, horticulture, fishing and timber.

Boyne Island has a number of heritage-listed sites, including: 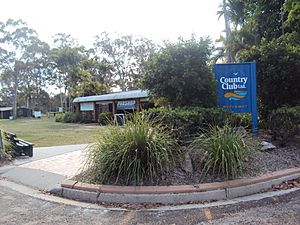 The Boyne Island Library is at the corner of Wyndham and Hayes Avenues; it is operated by the Gladstone Regional Council.

The 13 hole Boyne Island Tannum Sands Golf Course is located in Boyne Island adjacent to the Boyne River, in Jacaranda Drive. Hole 12 in particular is challenging, with out-of-bounds and water hazard in strategic places.

Boyne Island is home to the Boyne Tannum Hookup, which is a large fishing event held on the Queens Birthday long weekend. The event is held at Bray Park, which is on the river near the skate park. This event is very popular, with more than 3,000 entrants.

All content from Kiddle encyclopedia articles (including the article images and facts) can be freely used under Attribution-ShareAlike license, unless stated otherwise. Cite this article:
Boyne Island, Queensland Facts for Kids. Kiddle Encyclopedia.