Kids Encyclopedia Facts
This page is about the comic book series. For the location, see Boys Ranch, Texas. For the (unrelated) 1946 film, see Boys' Ranch (film).

Boys' Ranch was a six-issue American comic book series created by the veteran writer-artist team of Joe Simon and Jack Kirby for Harvey Comics in 1950. A Western in the then-prevalent "kid gang" vein popularized by such film series as "Our Gang" and "The Dead End Kids", the series starred three adolescents—Dandy, Wabash, and Angel—who operate a ranch that was bequeathed to them, under the adult supervision of frontiersman Clay Duncan. Supporting characters included Palomino Sue, Wee Willie Weehawken, citizens of the town Four Massacres, and various Native Americans, including a fictional version of the real-life Geronimo.

Noted for its use of single and double-page illustrations, the series has been lauded as one of Simon and Kirby's most significant creations. It was briefly revived through reprints in 1955, and all six issues were reprinted in a hardcover edition by Marvel Comics in 1991 with an introduction by Jim Simon. 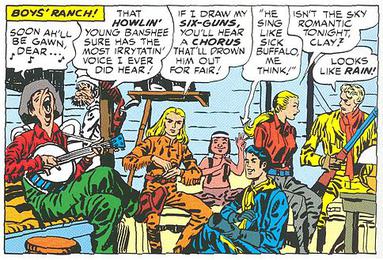 Clay Duncan is an Indian scout who serves as foreman at the Boys' Ranch. Modelled on frontiersman such as Kit Carson, Buffalo Bill Cody, and Davy Crockett, he serves as role model to the boy characters. While a young child, Duncan's parents were killed by bandits. He was rescued by a passing band of Apache Indians, and adopted by the Apache Running Bear, alongside his son, Geronimo. On reaching manhood, he left the Apache under the tutelage of Miles Freeman, a frontier scout. Running Bear's parting words were 'The war clouds darken once more over the white man and the Indian nations ... there is much need for warriors who talk peace to both sides! Freeman's words are that the great spirit has given you to us for such a mission'. He occasionally takes on other jobs such as army scout, mail delivery driver, and US Marshal. His horse's name is Ghost.

Dandy is a 'well-liked kid with a ready smile and a confident air' who served in the American Civil War. Usually depicted wearing a Union Army uniform, he left his adoptive parents from a small Ohio farm to explore the west. He has a noticeably greater active interest in the opposite sex, as exemplified in "I'll fight you for Lucy".

Wabash is an easy-going lad who "springs from the hill-folk" His dubious banjo-accompanied singing skills are a source of comedy relief. His family history is explicated in the Johnny Appleseed / Paul Bunyan-style tale "The Legend of Alby Fleezer."

Angel is a long-haired blond youth inspired by Billy the Kid. He is a skilled gunfighter, and possesses a fiery temper. Nicknamed 'the fire-eatin', lead-throwin' angel', when first meeting Clay Duncan, he presents himself thus: "Got not peeve! I live alone ... and I want to be left alone! I ain't like other kids! They got mothers and fathers to fuss over 'em! Well, I don't need nobody! Nobody! I kin handle myself against any man!" His horse's name is Paint.

Wee Willie Weehawken is the first arrival at Boys' Ranch. Styled the "oldest boy at Boys' Ranch" due to his advanced years, he cooks the meals at the ranch. "A very dangerous dude!", Boys' Ranch #1 reveals he had been a lawyer in his youth.

Happy Boy is a young Native American boy who appeared at the ranch one day. Never appearing on the cover, he does appear in one of the pin-up illustrations. He begins to communicate using sign language in Boys' Ranch #6 and plays a more prominent role in the story "Happy Boy carries the ball".

Palomino Sue hails from Abilene, Texas. Her father was a wagon master. She arrived at Boys' Ranch after a trip on the wagon her father was driving was intercepted by Indians. She was the only survivor. When expressing a desire to get involved in fighting, Clay Duncan insists that, because it's too dangerous for a woman, she must remain at the ranch. She agrees, but her acquiescence was a pretence, as she later joins the fray, offering opportune assistance. Similar scenes recur in her two subsequent appearances in issues #5 and 6.

Geronimo is portrayed as a fierce Apache military leader. As the son of Running Bear, he was a boyhood companion to Clay Duncan. Resentful of Duncan's position in the tribe, they become bitter rivals "The Clay Duncan Story".

Various Native American tribes appear as protagonists throughout. The conflict between Caucasians and American Indians is often the result of manipulation and exploitation by dishonest Caucasians. For example, in issue #2, Comanche and Blackfoot tribes are falsely told by white traffickers that their land will be seized so they can sell them rifles. In issue #5, the Apache Indians are blamed for robbing mail wagons, but in reality the perpetrators were white robbers using subterfuge to place blame on the Apaches.

The début issue opens with the chance meeting of Dandy and Wabash, who had been on opposite sides of the then recent Civil War, but became friends and decided to head out West together. Meanwhile, Clay Duncan meets up with Angel and the four come together in the defence of a ranch belonging to Jason Harper against an attack by Apache warriors. The story reveals Geronimo is the leader of that band when he joins the fray to order the band's retreat. As his dying act, he bequeathed the ranch to the youngsters for use as a shelter for homeless boys. They are later joined by Wee Willie Weehawken, because he was a middle-aged man, cited the technicality that the will didn't specify the maximum age to qualify as a "boy". Happy Boy joins the ranch shortly after. The ranch is near a town called Four Massacres.

The first story from issue #3, "Mother Delilah", has been singled out as one of Simon and Kirby's finest. Kirby has cited it as a personal favorite, and it has received accolades by critics, comic book professionals and fans alike.

A 20-page tale of betrayal, revenge, and redemption referencing the similarly themed biblical story of Samson and Delilah, the story features Clay Duncan, Angel, and Delilah Barker, a character influenced by Marlene Dietrich's character from Destry Rides Again. A character named Virgil Underwood provides a Greek chorus-like background commentary: "Those who find love are indeed fortunate, but woe betide them who demand it"; the story's final panel reads:

And thus it ends. But ever to repeat
Again and again in reality and rhyme –
Love's ever new as morning's dew,
And hate is as old as time."

Analyzing the story, R. C. Harvey concludes with: "From hate springs the desire for vengeance, and that desire, as Angel discovers, is debilitating. And even love can turn to hate unless love's motive is a giving spirit. But a giving love is the ultimate redemption."

All content from Kiddle encyclopedia articles (including the article images and facts) can be freely used under Attribution-ShareAlike license, unless stated otherwise. Cite this article:
Boys' Ranch Facts for Kids. Kiddle Encyclopedia.