Bradford Cathedral (Cathedral church of St Peter) is the Church of England cathedral in Bradford, West Yorkshire, England, which is built on a site used for Christian worship since the 8th century, when missionaries based in Dewsbury evangelised the area. Until 1919, it was the parish church of St Peter. The cathedral is a Grade I listed building.

The first church on the site was built in Anglo-Saxon times and fell into ruin during the Norman Invasion in 1066. The Norman Lady of the Manor, Alice de Laci, built a second church that three hundred years later would be destroyed by raiding Scots.

During the 14th century the church was rebuilt and some of the older masonry may have been used in the reconstruction of the nave. The nave arcades, the oldest parts of the present building, were completed in 1458. A clerestory above them was added by the end of the 15th century. Chantry chapels were founded, on the north side of the chancel by the Leventhorpe family, and on the south by the owners of Bolling Hall. The tower in the Perpendicular style was added to the west end and finished in 1508. In 1854 Robert Mawer carved a new reredos in Caen stone for the church. There is a photograph of it in the church archive. This reredos was lost during the 1950s rebuild by Edward Maufe. 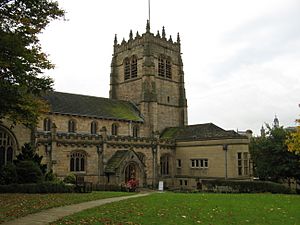 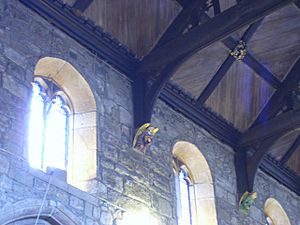 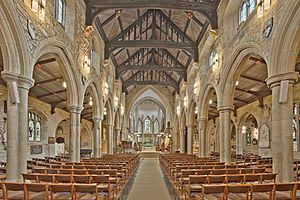 The nave inside the Cathedral

The building was extended in the 1950s and 1960s by Edward Maufe. The east end of the Cathedral (shown in the photo) is Maufe's work, but he reused the Morris & Co. stained glass from the old east window—there is therefore Victorian stained glass throughout the building including at the west end a window showing the women of the Bible. The many wall monuments include a sculpture by John Flaxman. Maufe also extended the west of the Cathedral on either side of the tower.

In 1987 the nave and west end were re-ordered so as to provide the setting and amenities needed for the increasing number of visitors and the many varied occasions when large numbers of people come to the Cathedral. New entrances were made through the tower walls to the offices and Song Room. The roof panelling was cleaned and restored and new lighting was installed. To enable flexibility of use the Victorian pews were replaced by chairs. The nave organ was removed to give more light and space at the west end, and a Bradford Computer Organ was installed, complementing the pipe organ in the choir with loudspeakers in the nave.

The hassocks were embroidered by people from many parishes in the Diocese. They depict Christian symbols and also a woolsack and the White Rose of York. The finest embroidery is seen on the cushions in the Sanctuary and the Choir.

At the beginning of the 21st century, the cathedral authorities decided to develop a museum of religion in St Peter's House (built in the 19th century as Bradford's main Post Office). The visitor numbers were much lower than expected and the project collapsed leaving the cathedral in debt, from which it was discharged in 2007. St Peter's House is now owned by a South Asian arts group, Kala Sangam.

The cathedral is set in a small conservation area which includes the close to its north. The close provides modern housing for the Dean and Canons Residentiary, the Bishop's official residence, Bishopcroft, being in Heaton, approximately 3 miles (4.8 km) from the city centre.

The cathedral and its predecessors were built on the shelf of alluvial land that had formed on the outside of the bend where Bradford Beck turns north, but the town grew up on the lower ground on the other side of the beck, so the church was always just outside the centre of town. In the 19th and 20th centuries the cathedral was partly hidden from the centre by buildings, first by the Post Office just below it, and subsequently by the 1960s developments of Forster Square and Petergate. The latter areas were demolished in 2006, and leaving the cathedral more visible than for many years prior to the completion of the Broadway Centre in 2015.

The cathedral is a Grade I listed building.

The boys and girls of the Choir sing as separate top lines and are drawn from as many as 20 local schools at any time. New entrants spend a couple of terms as a probationer, receiving basic training in singing and musicianship, before progressing to full membership. Full Choristers have the opportunity to take up individual, free-of-charge tuition in singing, musicianship, theory or piano on a 1:1 basis each week. The lay clerks of the Choir are highly skilled volunteers, most of whom make their living outside of music. In September 2015 residential choral scholarships were introduced. The Cathedral Consort, a high standard chamber choir consisting of adult sopranos and lay clerks, completes the Choral Foundation.

In addition to the schedule above, the Choir also performs other concerts and services within and outside the diocese. Although foreign tours have been undertaken, the most recent being to Barcelona in 2010 and Bavaria in 2008, touring more recently has been within the UK, with the girls and boys each undertaking a residential tour annually, with or without the choir adults. Tours have been undertaken in recent years to Bristol, Worcester, Edinburgh and Durham.

The girls and men are involved with the annual Yorkshire Cathedrals' Girls' Choirs' Festival and hosted the Festal Evensong in March 2015. The boy choristers had not been involved with the Yorkshire Three Choirs Festival since 1981, but with the recent renaissance of an independent boys' top-line at the Cathedral they, along with the lay clerks, were re-included in this annual festival from October 2015. Bradford Cathedral hosted the Festival in October 2016.

In July 2012, the Choir recorded two services for the BBC Radio 2 Sunday Half Hour programme, which were broadcast in Autumn 2012, and the girls and men sang live for BBC Radio 4 Sunday Worship in December 2012. The Choir recorded a CD of Evening Canticles, including Humphrey Clucas's 'Bradford Service' in November 2013, and February 2014 saw the Choir recording two programmes of BBC Songs of Praise, airing on 2 March 2014 and Palm Sunday, 13 April 2014. Since 2015, the Choir has performed annually with the European Union Chamber Orchestra, singing Vivaldi's Gloria, Haydn's Little Organ Mass, and Schubert's Mass No. 2 in G major.

A specification of the William Hill pipe organ(1904), with later modifications by Hill, Norman & Beard (1961) and J. W. Walker (1977) can be found on the National Pipe Organ Register. A flourishing series of Organ Recitals takes place on many Wednesday lunchtimes throughout the year at 1.00pm, attracting many well-known players. An Organ Appeal was launched in February 2013, aiming to raise £250,000 over several years, in order to secure the continued reliability of the instrument, as well as making possible several tonal adjustments. A. J. Carter of Wakefield and Andrew Cooper are working in conjunction to carry out this work on a phased basis over the coming years. The first phase, entailing the substantial upgrading of the console, was carried out in October 2014. The second phase, to clean, revoice and extend the Chancel (Positive) Division, was completed in the first half of 2018.

Organists and Directors of Music

All content from Kiddle encyclopedia articles (including the article images and facts) can be freely used under Attribution-ShareAlike license, unless stated otherwise. Cite this article:
Bradford Cathedral Facts for Kids. Kiddle Encyclopedia.