Breadsall Priory is a former Augustinian priory in Derbyshire, situated around two kilometres north of Breadsall, and two kilometres east of Little Eaton. The priory was established before 1266 by a member of the Curzon family. Only a small priory, Breadsall was dissolved in 1536.

Following dissolution the priory was demolished and a private home, also known as Breadsall Priory, built on the site; the house was altered and extended in both the 19th and 20th centuries, and only a single arch remains of the monastic buildings. The house and its stables are both Grade II Listed. The house is currently used as a hotel, while its stables are in residential use.

Breadsall priory was established before the middle of the 13th century by one of three generations of the Curzon family: Richard, Henry or Sir Robert Curzon (grandfather, son and grandson).

Breadsall Priory was very small. Breadsall was usually home to only the prior and two canons, and the taxation roll of 1291 reveals that the priory had an annual income of only £5 19s. However, Breadsall was frequently home to just the prior and one canon, or just the prior alone. The small number of canons made it impossible to elect a prior, meaning one was often chosen by a member of the Curzon family, who served as "hereditary patrons". The Curzon family were Lords of the Manor of Breadsall Overhall for eight generations.

During the reign of King Richard II (1377–1399), the manor passed to the Dethick family, through the marriage of Cecilia Curzon to William Dethick. However, the Dethick family's relationship to the priory was, for a period, unclear. In 1384, the appointment of the prior was made by Sir Thomas Wendesley, who was referred to as Patron pro hac vice. Several other priors were also appointed by the Bishop of Lichfield, rather than the Dethick family. However, in 1456 the bishop confirmed Sir William Dethick's right to "the first licence to elect or provide a superior when the priory was vacant".

In 1402 William Dethick, son of Cecilia Curzon, donated a moiety of the rectory of Mugginton to Breadsall. Dethick had, however, failed to follow proper procedure to alienate the lands; thus, upon his death, his "executors and trustees" were "heavily fined" by the crown.

In 1444, Breadsall priory was sued by the Collegiate Church of St Mary in Leicester, over the tithes of a field called "Hethfield", near Mugginton. St Mary's argued that the field belonged to the Parish of Duffield (which was in their control), and not that of Mugginton (controlled by the priory). The court found in favour of St Mary's and control of the field passed to the collegiate church. The rector of Mugginton was "condemned for contempt of Court of Arches" and ordered to pay the 40s. to St Mary's.

In 1448, Prior Thomas Breadsall complained to the Bishop of Lichfield that "certain charters and evidences which particularly affected the interests of William Dethick" had been stolen from the priory. The bishop ordered that at high mass in several local churches, the priests should spread the news of the theft, and instruct that the perpetrators were to be excommunicated unless the items were returned within 15 days. Its unclear whether this strategy worked.

In 1453, John Statham of Morley agreed to donate money to repair the roof of the priory church and the glazing in the clerestory. In return, Prior Thomas Breadsall agreed that the priory would celebrate mass annually, on the feast of the Eleven Thousand Virgins, for the souls of Goditha, Thomas, Elizabeth Cecilia and John Statham.

In 1454, a canon at Breadsall, John Derby (who was "probably a gifted preacher"), was granted a licence from Reginald Boulers, Bishop of Coventry and Lichfield to travel around the diocese preaching in its parish churches.

The Valor Ecclesiasticus of 1535 records Breadsall Priory had an annual income, after expenses, of £10 17s. 9d., and was in control of the parishes of Breadsall, Duffield, Horsley, Mugginton and Windley. The prior, William Pendylton, was the only resident at the priory at the time.

The priory was dissolved in 1536. Pendylton, was awarded a "minute pension" of only 5 marks a year.

Of the original priory buildings, only a single 13th-century arch remains, in the cellars of the later building constructed on the site.

Reappointed in 1322. This time chosen by Henry Curzon. 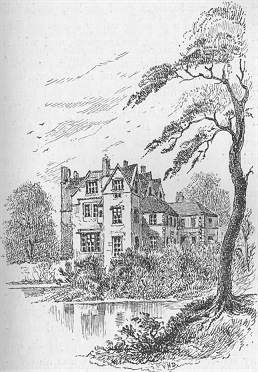 Following dissolution, some of Breadsall's lands weretransferred to Darley Abbey. However, Darley was also dissolved soon after, and the land passed to the crown. By September 1536, the priory site itself was leased by the crown, and being farmed by, Lawrence Holland of Belper. Following the Dissolution of the Monasteries in 1536, the site was granted by the Crown to the Duke of Suffolk.

Breadsall subsequently has passed through numerous owners. In the late 16th-century, when under the ownership of Sir John Bentley, an Elizabethan "E-plan" house was constructed on the former priory site.. The original house, also known as Breadsall Priory, was altered and extended by architect Robert Scrivener around 1861, and a new wing was added in 1906. The house's stable buildings were constructed in the mid-19th-century.

The physician and poet Erasmus Darwin, grandfather of Charles Darwin, moved to Breadsall shortly before his death in 1802. The house was subsequently home to his son Sir Francis Sacheverel Darwin (1786–1859). Sir Francis' son Edward Levett Darwin, author of the Gameskeeper's Manual (under the pseudonym "High Elms"), learnt natural history in its grounds.

The building is currently a Marriott hotel, with two 18-hole golf courses: one set in parkland and is called the Priory Course; the other is called the Moorland Course. In 2005, the priory hosted a G8 summit meeting of environment and development ministers.

All content from Kiddle encyclopedia articles (including the article images and facts) can be freely used under Attribution-ShareAlike license, unless stated otherwise. Cite this article:
Breadsall Priory Facts for Kids. Kiddle Encyclopedia.