Brian Patrick Dawkins (born October 13, 1973) is an American football player. He is a safety for the Denver Broncos of the National Football League. He was drafted by the Philadelphia Eagles in the second round of the 1996 NFL Draft. He played college football at Clemson.

He is a nine-time Pro Bowl selection. Dawkins is a member of the Philadelphia Eagles 75th Anniversary Team, the NFL 2000s All-Decade Team and the 20/20 Club (20 sacks, 20 interceptions).

Dawkins played college football for the Clemson Tigers. He was voted an All-American. Dawkins had 247 tackles and 11 interceptions during his time at Clemson. 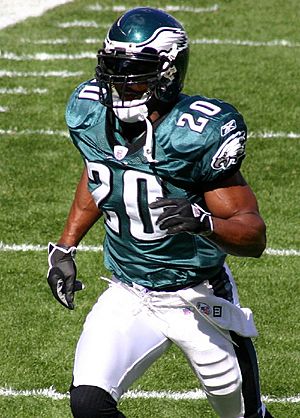 Brian Dawkins during his time with the Eagles.

Dawkins was drafted by the Philadelphia Eagles in the 2nd round (61 overall) of the 1996 NFL Draft. He beat out Eric Zomalt for a starting spot, which Dawkins never lost. He was a dominant force and is one of the most famous Philadelphia defenders. In 2002 against the Houston Texans, Dawkins became the first player ever to have a sack, interception, and touchdown catch in one game. He and the Eagles parted after the 2008 season. Dawkins's last game as an Eagle was an NFC Championship loss to the Arizona Cardinals.

Dawkins signed a 5-year, $17 million contract with the Denver Broncos. His hard-hitting and dominant style of play continued. After quarterback Tim Tebow was traded to he New York Jets in March of 2012, Dawkins said that Tebow "spiritually healed his injured neck."

Dawkins has been known for his hard hits that have come with the Eagles and Broncos. For his professional career, Dawkins has 911 career tackles, 36 forced fumbles, 26 sacks, 37 interceptions, 513 yards, and three total touchdowns.

All content from Kiddle encyclopedia articles (including the article images and facts) can be freely used under Attribution-ShareAlike license, unless stated otherwise. Cite this article:
Brian Dawkins Facts for Kids. Kiddle Encyclopedia.