Brookeville is a town located twenty miles (32 km) north of Washington, D.C., and two miles (3 km) north of Olney in northeastern Montgomery County, Maryland. Brookeville was settled by Quakers late in the 18th century, and was formally incorporated as a town in 1808. The town served the local agricultural industry, with a toll road built to connect it with markets in Washington, D.C. During the War of 1812, when British troops burned the White House, President James Madison sought refuge in Brookeville on August 26, 1814. During the American Civil War, Brookeville, along with nearby Sandy Spring, was a stop on the underground railroad. Brookeville's population was as high as 3,272 in 1920, though it declined with the advent of the automobile which provided greater mobility for people. Since the 1950s, Brookeville has developed rapidly into a suburban community. The population was 134 at the 2010 census.

The United States Postal Service defines a larger area as Brookeville than what falls within the town boundaries. This includes areas extending to the Patuxent River and the Howard County border, and including the small hamlets of Sunshine and Brighton. Reddy Branch Stream Valley Park surrounds the Town of Brookeville, with the creek flowing west to east towards the Patuxent. Other parks and recreational areas include Rachel Carson Conservation Park, Patuxent River State Park, and the Triadelphia Reservoir. Areas to the north of Brookeville in Howard County and Carroll County have also experienced rapid population growth. Georgia Avenue carries a substantial volume of traffic through the town, from these areas to the north into Montgomery County and Washington, D.C. In 1966, county planning officials recommended that a bypass be built to carry commuters around the town. The project is currently fully funded and in the engineering phase. Construction is projected to begin in 2016.

Today, Brookeville is an affluent residential community, with a large portion of residents employed with the government or related professional jobs. The town is governed by a three-person town commission, while surrounding unincorporated areas are administered by the county. Historically, the Brookeville Academy was an important educational institution for the community. In 1883, Sherwood High School opened as a Friends school and became a public school in 1909, serving Brookeville and other nearby areas.

Quakers Richard Thomas and his wife Deborah Brooke founded the town of Brookeville in 1794, and named it after her family. The town was established on land inherited by Deborah Brooke from her father Roger Brooke IV, son of an influential Quaker landholder, James Brooke. At the time, Brooke was the largest landholder in what would become Montgomery County. Thomas also set up a mill, along the Reddy Branch, which cuts through the town. Caleb Bentley opened a store and a post office in 1802, becoming the first postmaster of Brookeville. The town's charter was approved in 1808, though not formally issued until 1890.

Brookeville served as a market town for the agriculture industry in the surrounding area. During the 19th century, Brookeville was home to several mills, the Brookeville Academy (initially a boys' school), a post office, blacksmith's shop, St. Luke's Episcopal Church, Salem Methodist Protestant Church, and a number of shops. Newlin's Mill, located on the west side of town, processed high-quality castor oil and ground limestone for plaster. Thomas Mill was located on the east side of town. To transport goods more easily to markets in Washington, D.C., a prosperous farmer established a company in 1849 to build a toll road to connect Brookeville to the Seventh Street Pike. The turnpike was sold to the State of Maryland in 1914, and later became Georgia Avenue.

Brookeville was also home to Thomas Moore, Jr. who, along with Caleb Bentley, was instrumental in creation of the United States Department of Agriculture. Moore is also credited as the inventor of the first refrigerator, and coining the term. He created a portable contraption to transport butter and other products to sell at markets in Washington, D.C. His products commanded a high price, due to the extra freshness of the products at the market. Moore lived near the town, at Longwood Manor, which was built in 1817.

During the War of 1812, when the British burned parts of Washington, D.C., the Federal government and troops fled the capital. President James Madison first fled to Virginia, but then turned north. He arrived in Rockville at 6 p.m. on August 26, 1814, expecting to find General William H. Winder and his troops. They already proceeded on towards Baltimore. Madison continued on eastward and arrived in Brookeville on horseback. Madison reportedly carried with him a strongbox, which contained the entire U.S. treasury. On the night of August 26, he stayed in the home of Caleb Bentley, whose wife Henrietta Thomas was close friends with Dolley Madison.

Madison stayed up all night, dispatching orders, while soldiers remained on guard outside. After the British left Washington, they sailed to nearby Baltimore, where they attacked Fort McHenry and were repulsed. Upon hearing that news, Madison returned to Washington. Madison wrote a note to his wife that morning. 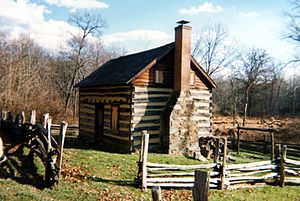 The Oakley Farm, located on the western edge of Brookeville, thrived during the 18th and 19th centuries. Log cabins, dating from the 1820s, were built on the Oakley/Dorsey farm, to house slaves and later free black families. The Oakley Cabin is now maintained by the Montgomery County Department of Parks. A number of other 18th and 19th century cabins still exist on private property in the Brookeville area.

During the American Civil War, George B. McClellan sent Union troops (First and the Ninth Corps) through Brookeville, on their way to Antietam. This was one of three groups of troops that came from different directions towards Antietam. The Quakers played an instrumental role in aiding escaped slaves on the underground railroad. Nearby Sandy Spring was an important stop. Historians suggest that the Madison House was also used as a stop on the underground railroad during the Civil War. Part of the Madison House once served as the town's post office. A false stone wall in the room hid a staircase that descended in two directions, including into a hidden area in the basement where escaped slaves could hide.

In 1910, the Salem United Methodist Church was built to replace another church that was destroyed by fire, and the church cemetery has been there since the mid-19th century. By 1900, the mills and shops had shut down, and Brookeville remained a residential town. In 1915, the Bentley family sold the Madison House to Roger Brooke, a leader of the Quaker community. The house later changed hands, owned for some time by Elisha Hall, a principal at the Brookeville Academy, banker Remus Riggs, and Gene Archer, a NBC television personality.

The automobile gave people more mobility and changed the market, with the nearby town of Olney taking prominence over Brookeville. Since the 1950s, Olney has rapidly developed, putting pressure on the community. The Brookeville Historic District was placed on the National Register of Historic Places in 1979. Brookeville's historic designation has helped it retain historic character. 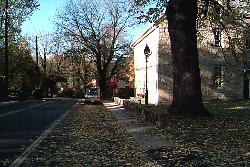 North on Georgia Ave into Brookeville, 2006

Brookeville is located in northeastern Montgomery County, Maryland, close to the Patuxent River and the Howard County border. The town is located 2 miles (3.2 km) north of Olney, Maryland. The Town of Brookeville is formally incorporated, and covers an area of 0.1 square miles (0.26 km2). Areas beyond the formal town boundaries, extending to the Howard County boundary, are defined as Brookeville by the USPS, all falling within the 20833 ZIP Code. Located within the ZIP Code are the small hamlets of Sunshine and Brighton. Georgia Avenue, which is a major north–south route through this part of Maryland, passes through the Town of Brookeville. Brookeville Road connects the town with Laytonsville and other areas to the west. Brighton Dam Road extends to the east, crossing New Hampshire Avenue, over the Patuxent River, and into Howard County.

Georgia Avenue, which begins in Washington, D.C., is a two lane road when it passes through the Town of Brookeville, with a stop sign and tight turn that takes it through the historic district. In 1989, the road carried 8,000 vehicles daily, a number that has increased to 18,000 vehicles each weekday in 2007. The traffic mainly consists of commuters from Carroll County and Howard County. The traffic volume on Georgia Avenue is more than the road was designed to handle. Brookeville residents have advocated for a bypass road to be constructed, to take traffic around the town. The bypass road around the town has been on the planning stages for some time, since being recommended by county planning officials in 1966. The project remains on hold, with design, engineering and right-of-way acquisition delayed due to lack of funding and environmental concerns. 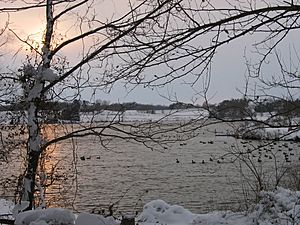 Reddy Branch, a tributary of the Patuxent River, flows along the north and eastern edges of the town. Reddy Branch Stream Valley Park is located along Brookeville Road, to the west of the town, and to the east along Brighton Dam Road. Hawling Hills Park and Patuxent River State Park are located along New Hampshire Avenue, north of Ashton and to the east of Brookeville. Patuxent River State Park is used for hunting, fishing, hiking and horseback riding. Rachel Carson Conservation Park, located to the north, between Brookeville and Laytonsville, is undeveloped and has a number of hiking trails. The Triadelphia Reservoir, created by the Brighton Dam, is located along the Patuxent River. The Washington Suburban Sanitary Commission maintains 6,000 acres (24 km2), in and around the reservoir, which are open to the public for recreational purposes. The Reservoir is a popular recreation spot that is suitable for fishing, kayaking, and other activities. Mount Zion Park is a small park with playgrounds, ball fields, tennis courts, and picnic facilities. Within the town itself, Powers’ Woods Park is a new 2-acre (8,100 m2) park that is slated to be located near a recently restored one-room schoolhouse.

According to the United States Census Bureau, the town has a total area of 0.12 square miles (0.31 km2), all of it land.

The climate in this area is characterized by hot, humid summers and generally mild to cool winters. According to the Köppen Climate Classification system, Brookeville has a humid subtropical climate, abbreviated "Cfa" on climate maps.

The population in the Brookeville area is well-educated, with 57.6% of those age 25 or older having a college education, which compares to the national average of 24.4%. The median household income is $103,879, compared to a national average of $41,994. Per capita income is $40,540 compared to $21,587 for all of the United States. 76.2% of the population over age 16 is in the labor force. Average commuting time is 35.9 minutes, with 84.1% driving alone, 9% carpooling, 2.3% using public transportation, and 3.1% working at home. Most people are employed in management, professional, and related occupations, with 59.5% in those types of jobs. 19.3% are employed in sales and office occupations, 10.7% in service occupations, 5.7 in construction, extraction, and maintenance occupations, and 4.9% in production, transportation, and material moving occupations. 24.4% of those in the labor force are government workers.

There were 54 households of which 33.3% had children under the age of 18 living with them, 66.7% were married couples living together, 1.9% had a female householder with no husband present, 1.9% had a male householder with no wife present, and 29.6% were non-families. 22.2% of all households were made up of individuals and 9.3% had someone living alone who was 65 years of age or older. The average household size was 2.48 and the average family size was 2.95.

All content from Kiddle encyclopedia articles (including the article images and facts) can be freely used under Attribution-ShareAlike license, unless stated otherwise. Cite this article:
Brookeville, Maryland Facts for Kids. Kiddle Encyclopedia.