Bruceville-Eddy is a city in McLennan and Falls Counties in the U.S. state of Texas. Its population was 1,475 at the 2010 census.

Most of the city is in McLennan County and is part of the Waco metropolitan statistical area. A small southern portion is in Falls County.

According to the United States Census Bureau, the city has a total area of 3.2 square miles (8.3 km2), all of it land.

The community of Bruceville-Eddy began as two separate settlements: Bruceville and Eddy. Both communities became stations on the Missouri–Kansas–Texas Railroad (Katy Railroad) in 1882.

Bruceville was named for Lucien N. Bruce, who donated land for the railroad station. Most of Bruceville's residents came from the community of Mastersville, located two miles to the north, that the railroad has bypassed. By 1900, Bruceville has approximately 289 residents and several businesses. An Independent School District was formed in 1904. A bank operated in Bruceville from 1907 to 1927. The community had a population of around 500 during the 1930s and 1940s, but began to decline in the post-war years. By 1964, the number of inhabitants had fallen to 175 and decreased to just 25 in 1970.

Initially known as "Marvin", the community was renamed after the railroad arrived in 1882, to honor rail division superintendent Everett B. Eddy. By the mid-1880s, the community was home to 150 people, three general stores, two churches, a school, and a gristmill. Throughout the 1890s, Eddy continued to experience rapid growth, with some estimates placing the total population as high as 700. A bank opened in 1901 and received a national charter in 1915. In 1928, the schools in Bruceville and Eddy were consolidated, the first such merger in McLennan County. By the late 1920s, Eddy had approximately 450 residents. The population declined to 350 by the mid-1940s, but rose to around 600 in the 1960s as road improvements made commuting easier for locals.

Owing to its unique history, Bruceville-Eddy operated two separate post offices after it was incorporated. Eddy's post office, located at 100 Franklin Road, operates under the ZIP code 76524. The post office in Bruceville was located at 203 First Street and had the ZIP code 76630. On June 1, 2009, it was closed due to foundation problems that caused the building to be deemed unsafe. All postal operations were transferred to Eddy. 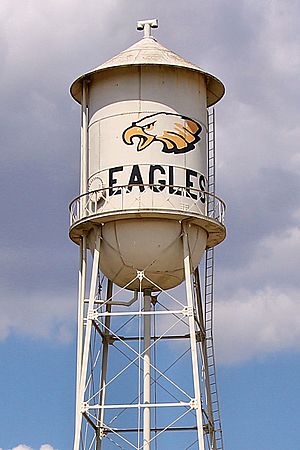 The water tower in Bruceville-Eddy highlighting the high school's mascot

All content from Kiddle encyclopedia articles (including the article images and facts) can be freely used under Attribution-ShareAlike license, unless stated otherwise. Cite this article:
Bruceville-Eddy, Texas Facts for Kids. Kiddle Encyclopedia.