Buddhism in Pakistan facts for kids

There are no significant Buddhist communities left in Pakistan.

A few Buddhists may still exist in Pakistani Kashmir and a significant community exists in Jammu and Kashmir to the east of the Line of Control. Mostly Ladakhi and ethnically related to Tibetans (plus a few Indo-Aryan Dards), a rough dividing line between Islamic culture and Buddhist culture can be drawn through Mulbekh and Shergol in the Indus valley (to the east of Kargil) and well to the west of Leh, the Nun Kun massif and Rangdum Buddhist monastery at the head of the Suru river valley (a tributary of the Indus) on the Indian Kashmiri side of the line of control. 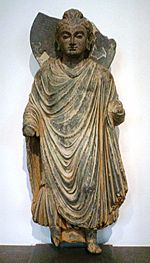 The region that is today known as Pakistan once had a large Buddhist population, with the majority of people in Gandhara (present day North Western Pakistan and Eastern Afghanistan) being Buddhist. Gandhara was largely Mahayana Buddhist, and was also a stronghold of Vajrayana Buddhism. The Swat Valley, known in antiquity as Uddiyana, was a kingdom tributary to Gandhara. There are many archaeological sites from the Buddhist era in Swat.

The Buddhist sage Padmasambhava is said to have been born in a village near the present day town of Chakdara in Lower Dir District, which was then a part of Uddiyana. Padmasambhava is known as Guru Rinpoche in Tibetan and it is he who introduced Vajrayana Buddhism in Tibet.

Buddhism was also practiced in the Punjab and Sindh regions.

Gandhara remained a largely Buddhist land until around 800 AD, when the Pashtun people invaded the region from Southern Afghanistan and introduced the Islamic religion.

Most Buddhists in Punjab converted to Hinduism from 600 AD onwards. Buddhism was the faith practiced by the majority of the population of Sindh up to the Arab conquest by the Umayyads in 710 AD. After the partition of Pakistan and India, the Buddhists fled to India, similar to other faiths like Hindus, Sikhs, and Christians in the Pakistan region.

All content from Kiddle encyclopedia articles (including the article images and facts) can be freely used under Attribution-ShareAlike license, unless stated otherwise. Cite this article:
Buddhism in Pakistan Facts for Kids. Kiddle Encyclopedia.