Bundeena is a village on the outskirts of southern Sydney, in the state of New South Wales, Australia. Bundeena is located 29 km south of the Sydney central business district and is part of the local government area of the Sutherland Shire.

Bundeena is adjacent to the village of Maianbar and lies on the southern side of Port Hacking, opposite the suburbs of Cronulla and Burraneer. The village is surrounded by the Royal National Park.

The beaches at Bundeena are Jibbon Beach, Gunyah Beach, Horderns Beach and Bonnie Vale Beach. Cabbage Tree Creek and 'The Basin' separate Bundeena from the smaller village of Maianbar. A bush track and footbridge link the two villages. Bonnie Vale is also one of the few camp grounds within the Royal National Park. 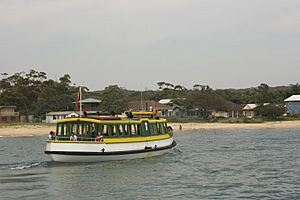 Bundeena may be reached by passenger ferry from Cronulla or by road through the Royal National Park from Sutherland or Waterfall. Cronulla and National Park Ferry Cruises provides regular ferry services between Cronulla and Bundeena. The wharf at Cronulla is located on Gunnamatta Bay, near Cronulla railway station. Ferry trips vary from 20 minutes to 30 minutes depending on the weather. Many people from Bundeena drive to the railway station at Sutherland, as it is only a 25-minute drive as opposed to 30 minutes by ferry to Cronulla and then a 15-minute train trip to Sutherland. 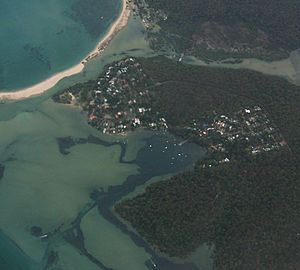 Aerial image looking to the north. The three peninsulas, from left to right, are Yenabilli, Maianbar and Bundeena

Bundeena is an Aboriginal word meaning "noise like thunder" (presumed to be a reference to the sound of the waves crashing on Horderns Beach). Aboriginal rock engravings made by Dharawal people can be found at Jibbon Head.

Bass and Flinders investigated the area in 1796, deciding that it was not a suitable location for a settlement.

Bundeena's first authorised white settler, Owen Byrne, was granted land at the site in 1832. George Simpson received a land grant at the adjacent Bonnie Vale in 1863. Simpson's Hotel was opened in the area now known as Simpsons Bay by George's son, William, in the 1870s. The sandstone Simpson's House (1870s) is still standing at what is now Bonnie Vale Campground.

A wharf was built in 1890 and W.A. Hodgkinson conducted a launch service from Gunnamatta Bay in 1908. Captain R.R. Ryall commenced the Cronulla to Bundeena ferry service in 1915. The Wharf was reconstructed in 1920. The district's first store commenced operations at the beginning of the 1930s. Bundeena Public School opened on 14 September 1948.

All content from Kiddle encyclopedia articles (including the article images and facts) can be freely used under Attribution-ShareAlike license, unless stated otherwise. Cite this article:
Bundeena, New South Wales Facts for Kids. Kiddle Encyclopedia.