Busabout Sydney is a bus company that operates route bus services in South West Sydney, Australia. It currently operates on behalf of Transport for NSW. 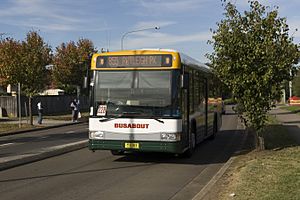 Bustech bodied Mercedes-Benz O500LE in Prestons in May 2012

In 1994 Joe and Tony Calabro bought a 50% share of Neville's Bus Service with the operation rebranded as Busabout.

The Calabro family had a long history with the south-western suburbs, having operated services in Bonnyrigg from 1951 until selling the operation to Westbus in June 1989 with 70 buses and coaches. Joe and Tony Calabro subsequently purchased Surfside Buslines in October 1989 followed by Hawkesbury Valley in November 1990.

On 2 December 2008, the Calabros purchased the Fearne's Coaches business in Wagga Wagga and Harden and rebranded it as Busabout Wagga Wagga

Since 2005 Busabout's services have been part of Sydney Bus Region 2, with some routes part of Region 3. On 13 October 2013, Transit Systems Sydney took over Region 3 having won a tender to operate the new region including two routes that were operated by Busabout.

The Transit Australia Group consists of Queensland operations including Surfside Buslines, which the Calabro family has acquired.

As at December 2014, the fleet consisted of 112 buses. Since 2001 all purchases have been bodied at the Calabro's Bustech operation. With the introduction of the Busabout name in 1994, a white, green and yellow livery was introduced. In 2010 the Transport for New South Wales white and blue livery began to be applied.

In July 2014, the Joint Heavy Taskforce, made up of people from NSW Police and Roads & Maritime Services, inspected the fleet at Smeaton Grange depot and found that 32 out of 88 buses had major defects.

All content from Kiddle encyclopedia articles (including the article images and facts) can be freely used under Attribution-ShareAlike license, unless stated otherwise. Cite this article:
Busabout Sydney Facts for Kids. Kiddle Encyclopedia.