Bushnell is a city in McDonough County, Illinois, United States. The population was 2,970 at the 2020 census.

The town was founded in 1854 when the Northern Cross Railroad built a line through the area. Nehemiah Bushnell was the President of the Railroad, and townspeople honored him by naming their community after him. The railroad later became part of the Chicago, Burlington and Quincy Railroad, which continues to operate through Bushnell under the name Burlington Northern Santa Fe. Bushnell was also served by the Toledo, Peoria and Western Railway, now the Keokuk Junction Railway. Amtrak trains pass through the city but do not stop.

The Nagel Brothers of Bushnell were the first to invent a process of making rolled oats without having to steam the oats. Up until this time, the oats were first steamed to separate the groat from the hull. The patent for this new process was later sold to the Quaker Company. 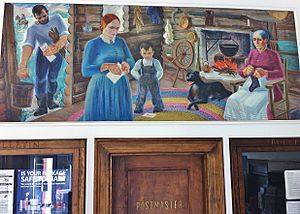 An oil on canvas mural, "Pioneer Home in Bushnell" by Reva Jackman is on display in the Bushnell Post Office

From 1991 to 2012, Bushnell was home to one of the largest Christian Music and Arts festivals in the world, known as the Cornerstone Festival. Each year around the 4th of July, 25,000 people from all over the world would descend on the small farm town to watch over 300 bands, authors and artists perform at the Cornerstone Farm Campgrounds. The festival was generally well received by locals, and businesses in the area would typically put up signs welcoming festival-goers to their town.

As a result of the location of the music festival, numerous live albums and videos have been recorded or filmed in Bushnell, including the annual Cornerstone Festival DVD. The festival's 20th anniversary DVD also included interviews with local Bushnell citizens and business owners.

Cornerstone held its final festival in 2012 and no longer operates.

A short instrumental song titled "Let's Hear That String Part Again, Because I Don't Think They Heard It All the Way Out in Bushnell" appears on Sufjan Stevens' 2005 album Illinois.

Beginning in 1908, the Truman Pioneer Stud Farm in Bushnell was home to one of the largest horse shows in the Midwest. The show was well known for imported European horses. The Bushnell Horse Show returned in 2004 and has become one of the better draft horse hitch shows in the tri-state region. The Bushnell Horse Show features some of the best Belgian and Percheron hitches in the country. Teams have come from many different states and Canada to compete.

All content from Kiddle encyclopedia articles (including the article images and facts) can be freely used under Attribution-ShareAlike license, unless stated otherwise. Cite this article:
Bushnell, Illinois Facts for Kids. Kiddle Encyclopedia.