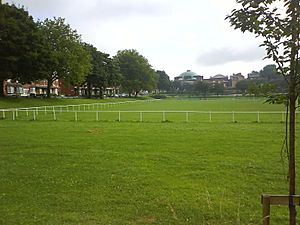 Buslingthorpe is an area of Leeds, West Yorkshire, England. It is about one mile north of the city centre and currently falls within the Hyde Park and Woodhouse ward of the City of Leeds Council. Much of the housing in the area was demolished by slum clearance in the 1950s.

A writer in Notes and Queries in 1932 noted that Buslingthorpe (shared with Buslingthorpe in Lincolnshire and Buckfastleigh, Devon) contains 13 different letters, exactly half the alphabet, none repeated and with no hyphenation. The writer wondered if it was unique. The same question was raised earlier in Strand Magazine in 1921.

All content from Kiddle encyclopedia articles (including the article images and facts) can be freely used under Attribution-ShareAlike license, unless stated otherwise. Cite this article:
Buslingthorpe, Leeds Facts for Kids. Kiddle Encyclopedia.