Byrnestown is a rural locality in the North Burnett Region of Queensland, Australia. The town was established as one of the first communes in Queensland.

In response to the idea of communes promulgated by upotian William Lane, in 1893 the Queensland Government legislated the Queensland Co-operative Communities Land Settlement Act to allow a group of 30 or more men and their families to establish a commune in Queensland. This led to many groups forming to pursue the goal of establishing a commune; one of these groups called themselves Byrnestown after the then Queensland Attorney-General Thomas Joseph Byrnes (who would become Premier of Queensland in 1898).

In late 1893, the groups were offered sites near Roma but, following an inspection, the Byrnestown group rejected that location believing that the sites offered were too far from the town. In January 1893, the Byrnestown group inspected land in the Burnett area and found it suitable, having a water supply from the Wetherton Creek and frontage to the prospective railway to Gayndah. As a result, the Byrnestown commune (comprising 34 members) was registered on 24 February 1894 receiving 4,600 acres (1,900 ha) for an 8-year term. Another group calling themselves Resolute selected land immediately to the east of the Byrnestown group, while a third group Bon Accord also took land in the Burnett area at Bon Accord.

The first of the Byrnestown settlers arrived in March 1894. Although all communes were given initial funds, by June 1894, Byrnestown requested and received additional financial assistance. By October 1894, there were 169 people in the Byrnestown commune: 34 men, 28 wives and 107 children. The group had erected numerous bark dwellings, farm buildings and were beginning work on a school building, but had made more limited progress on clearing and planting the land. 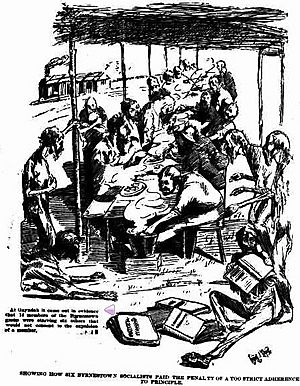 "Showing how six Byrnestown socialists paid the penalty of a too strict adherence to principle", cartoon, 1895

The Byrnestown commune did not succeed. As early as November 1894, there were allegations (denied by the group) that some of their members were working outside the commune but not contributing their wages to the commune as their agreement required. The following month some members were petitioning the government for funds, saying that the commune's management committee was denying them food. At the agricultural show at Degilbo in February 1895, it was revealed that 6 men had left the group and a further 9 were refusing to work, with the group's secretary suggesting the internal disputes arose from differences in nationality and religion. An inspection in April 1895 reported on limited progress at cultivation of the land, possibly linked to the number of men in the group working outside the commune. By July 1895, members of group had resorted to legal action over the management committee refusal to provide food to members who disagreed with their decisions. Byrnestown was not alone in its failure; in August 1895 a report by the Under-Secretary for Agriculture revealed most of the communes established were "in a state of collapse" and that there was little prospect of them being economically self-supporting.

One small success for the commune was the opening of the Byrnestown Provisional School on 4 September 1895. However, the Byrnestown commune soon complained that children from the neighbouring Resolute commune were attending their school without contributing to it.

In October 1895 the Byrnestown committee instituted a system of punishments for any member (or their wife) who criticised their commune or suggested it might not be a success. In December 1895, the Queensland Government passed legislation to enable communes to be dissolved and the communal land divided among the members. The members of Byrnestown immediately petitioned the Queensland Government to divide their communal land into individual portions. In April 1896, 2,560 acres (1,040 ha) of the Byrnestown communal land was divided among 16 of its members, bringing the commune to an end. Those members who chose to take up individual land generally succeeded in their enterprise and were described less than two years later in February 1896 as "doing pretty well", suggesting that dissolution of the commune had rid the community of those men unsuited to agriculture or generally disinclined to work. In 1903, there were over 1,000 acres (400 ha) under cultivation, growing mostly maize, potatoes and fodder crops; the main barrier to greater prosperity was the distance to the railway. 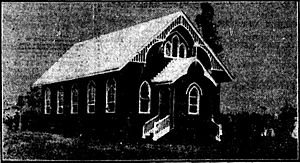 The Church of the Sacred Heart was opened in Byrnestown on 22 February 1925 by Roman Catholic Archbishop James Duhig.

In May 1931, a railway carriage carrying the Queensland Premier Arthur Edward Moore and Robert Boyd MLA and their wives came detached during shunting operations at the Gooroolba junction and rolled away, gathering speed down a streep grade. It hurtled, swaying dangerously, through Byrnestown railway station and eventually came to a halt five miles later on flat ground near the Wetheron railway station. Nobody was hurt.

The Byrnestown Commune and Cemetery are listed on the North Burnett Regional Council's local heritage register.

All content from Kiddle encyclopedia articles (including the article images and facts) can be freely used under Attribution-ShareAlike license, unless stated otherwise. Cite this article:
Byrnestown Facts for Kids. Kiddle Encyclopedia.