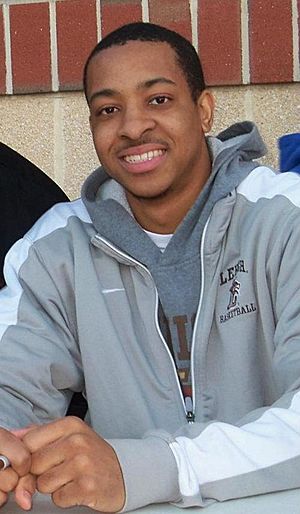 Christian James (CJ) McCollum (born September 19, 1991) is a professional basketball player for the Portland Trail Blazers. He was drafted 10th in the 2013 NBA Draft. In his third year, he won the NBA Most Improved Player award. He played college basketball for the Lehigh Mountain Hawks. In 2017, he scored 27 points in the first half against the #1 seeded Golden State Warriors. That year he also had the highest free-throw percentage in the league.

All content from Kiddle encyclopedia articles (including the article images and facts) can be freely used under Attribution-ShareAlike license, unless stated otherwise. Cite this article:
C. J. McCollum Facts for Kids. Kiddle Encyclopedia.