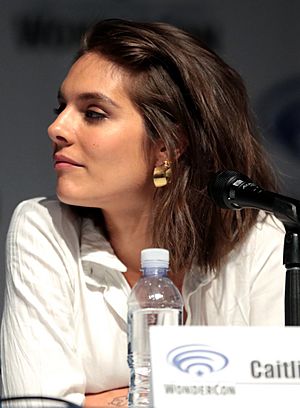 Caitlin Jean Stasey (born 1 May 1990) is an Australian actress and singer. She is best known for her role in the soap opera Neighbours. She also has appeared in television series such as The Sleepover Club, Please Like Me and Reign. She also appeared in the movies Tomorrow, When the War Began (2010), All Cheerleaders Die (2013), Lust for Love (2014) and I, Frankenstein (2014).

Stasey was born in Melbourne, Victoria. Her English parents are from Norwich. She is a feminist. She married American actor Lucas Neff in 2016.

All content from Kiddle encyclopedia articles (including the article images and facts) can be freely used under Attribution-ShareAlike license, unless stated otherwise. Cite this article:
Caitlin Stasey Facts for Kids. Kiddle Encyclopedia.