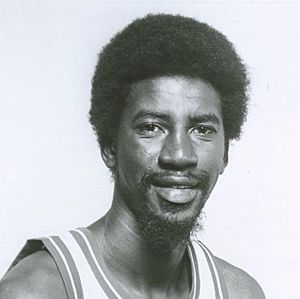 Jones with the Philadelphia 76ers.

Caldwell "Pops" Jones (August 4, 1950 – September 21, 2014) was an American professional basketball player. He played as both a center and a power forward between 1973 and 1990. He first played in the American Basketball Association (ABA) from 1973 until 1976. He later played in the National Basketball Association (NBA) from 1976 until 1990. Teams he played for in his fourteen-season career in the NBA were the Philadelphia 76ers, the Portland Trail Blazers, the Houston Rockets, the Chicago Bulls, and the San Antonio Spurs.

Jones was born in McGehee, Arkansas to an African American family. He was married to Vanessa. They had three daughters: Zori, Maya and Leah.

Jones died from a massive heart attack on September 21, 2014 while playing golf in Atlanta, Georgia. He was 64.

All content from Kiddle encyclopedia articles (including the article images and facts) can be freely used under Attribution-ShareAlike license, unless stated otherwise. Cite this article:
Caldwell Jones Facts for Kids. Kiddle Encyclopedia.