Stockbridge is part of the Atlanta metropolitan area.

The area was settled in 1829 when Concord Methodist Church was organized near present today Old Stagecoach Road. It was granted a post office on April 5, 1847 named for a traveling Professor, Levi Stockbridge, who passed through the area many times before the Post Office was built. He was said to be well known and respected in his namesake community. Others contend that the city was named after Thomas Stock, who was State Surveyor and President of the Georgia State Senate in the 1820s.

In 1881, the East Tennessee, Virginia and Georgia Railroad was to pass through Stockbridge between Macon and Atlanta. The settlers who owned the land about Old Stockbridge asked so much for their land that two prominent Atlanta citizens, John W. Grant and George W. Adair, bought a tract about a mile south of Old Stockbridge and offered lots at a reasonable price. Here the railroad built their depot and many lots were sold. The depot was located about 600 feet (180 m) north of what is now North Henry Blvd but was destroyed by the Southern Railway in the early 1980s.

The Aaron and Margaret Parker Jr. House and Walden-Turner House in Stockbridge are listed on the National Register of Historic Places.

Levi Stockbridge was born on March 13, 1820, and fits the time frame just prior to the Civil War. Levi would have been 27 years of age when Stockbridge was assigned a post office in 1847.

Until May 6, 1992, there had never been a name other than Professor Stockbridge. At that time, Levi Stockbridge was mentioned as the person for whom the city may have been named.

It is not certain that Levi Stockbridge was the individual for whom the citizens of the community named their post office and village. However, through John Stockbridge’s letters and many conversations with him, it is believed that this is the rightful Professor Stockbridge who had been unknown for 146 years. 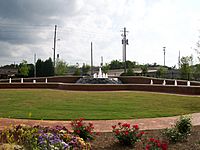 After February 2007 the city had new plans drawn up to build the new city hall. The plans call for the new city hall and park and green space to all be built around the Stockbridge Florist shop that started the now famous Eminent Domain lawsuit.

The city says that the new development will strengthen the old and worn down downtown business district. The Stockbridge City Manager Ted Strickland, said that the new city hall was absolutely necessary, because some current city employees are working out of closets and supply rooms.

During interviews with city workers, they complained that it was interesting how the city could "spend 2 million dollars on a water fountain" but could not give its employees a mere $0.50 raise. After being more than 1 million dollars over budget and 2 years behind on the project the new city hall was opened in August 2009.

Stockbridge is served by the Henry County School District. Schools serving the Stockbridge area include:

Stockbridge is served by the following highways:

All content from Kiddle encyclopedia articles (including the article images and facts) can be freely used under Attribution-ShareAlike license, unless stated otherwise. Cite this article:
Stockbridge, Georgia Facts for Kids. Kiddle Encyclopedia.