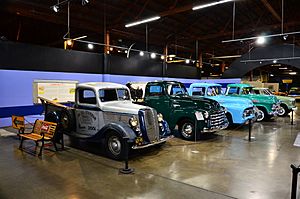 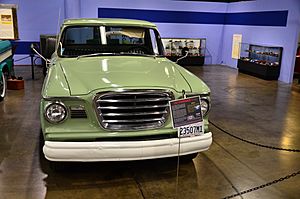 The California Automobile Museum was the first automobile museum in the west to be established in perpetuity. Founded in 1983 as the California Vehicle Foundation, the museum opened to the public in 1987 as the Towe Ford Museum, displaying the largest collection of Fords in the world, courtesy of Edward Towe, a Montana banker. Delta Pick Mello is the executive director of the museum.

The first auto to be donated to the California Automobile Museum was a restored 1938 Buick sedan, a gift from John Joyce, president of the Golden One Credit Union, which is still on display at the museum. In 1997, the museum was renamed the Towe Auto Museum, as they began displaying vehicles of all makes and models. In 2009, the Board of Directors officially changed the name of the museum to the California Automobile Museum, reflecting the expanded mission it has grown into over the last 25 years.

Most of the 150 vehicles currently on display are on loan from private exhibitors. The cars on display represent a cross-section of cars driven in California over the last 120 years. Approximately 40% of the vehicles are owned by the California Vehicle Foundation. The rest are on loan from private exhibitors, and display terms vary from vehicle to vehicle, so the display is a constantly changing exhibit of rolling stock to better tell the story of the development of the automobile and its effect on our lives. The museum offers tours daily. The museum regularly hosts special exhibitions, including one on pickup trucks in 2016.

All content from Kiddle encyclopedia articles (including the article images and facts) can be freely used under Attribution-ShareAlike license, unless stated otherwise. Cite this article:
California Automobile Museum Facts for Kids. Kiddle Encyclopedia.