Amadeo Pietro Giannini, also known as Amadeo Peter Giannini or A. P. Giannini (May 6, 1870 – June 3, 1949) was an Italian-American banker who founded the Bank of Italy, which became Bank of America. Giannini is credited as the inventor of many modern banking practices. Most notably, Giannini was one of the first bankers to offer banking services to middle-class Americans, rather than only the upper class. He also pioneered the holding company structure and established one of the first modern trans-national institutions.

Amadeo Pietro Giannini was born in San Jose, California, to Italian immigrant parents. He was the first son of Luigi Giannini (1840–1877) and Virginia (née Demartini) Giannini (1854–1920). Luigi Giannini immigrated to the United States from Favale di Malvaro near Genoa, Liguria in the Kingdom of Sardinia (later part of Italy) to prospect in response to the California Gold Rush of 1849. Luigi continued in gold during the 1860s and returned to Italy in 1869 to marry Virginia, bringing her to the US and settling in San Jose. Luigi Giannini purchased a 40-acre farm at Alviso in 1872 and grew fruits and vegetables for sale. Four years later Luigi Giannini was fatally shot by an employee over a pay dispute. His widow Virginia, with two children and pregnant with a third child, took over operation of the produce business. In 1880, Virginia married Lorenzo Scatena (1859–1930) who began L. Scatena & Co. (which A.P. Giannini would eventually take over). Giannini attended Heald College but realized he could do better in business than at school. In 1885, he dropped out and took a full-time position as a produce broker for L. Scatena & Co.

Giannini worked as a produce broker, commission merchant and produce dealer for farms in the Santa Clara Valley. He was successful in that business. He married Clorinda Cuneo (1866–1949), daughter of a North Beach, San Francisco real estate magnate, in 1892 and eventually sold his interest to his employees and retired at the age of 31 to administer his father-in-law's estate. He later became a director of the Columbus Savings & Loan, in which his father-in-law owned an interest. Giannini observed an opportunity to service the increasing immigrant population that were without a bank. At loggerheads with the other directors who did not share his sentiment, he quit the board in frustration and started his own bank.

Giannini founded the Bank of Italy in San Francisco on October 17, 1904. The bank was housed in a converted saloon as an institution for the "little fellow". It was a new bank for the hardworking immigrants other banks would not serve. Deposits on that first day totaled $8,780. Within a year, deposits soared above $700,000 ($20.4 million in 2020 dollars). The 1906 San Francisco earthquake and fires leveled much of the city. In the face of widespread devastation, Giannini set up a temporary bank, collecting deposits, making loans, and proclaiming that San Francisco would rise from the ashes.

Immediately after the earthquake, he moved the vault's money to his home outside the fire zone in then-rural San Mateo, 18 miles away. A garbage wagon was used to haul the money, hidden beneath garbage. The fires had heated the vaults of other big banks, so that the sudden temperature change from opening them risked destroying the contents; many vaults were kept closed for weeks. During this period Giannini was one of the few bankers who could satisfy withdrawal requests and provide loans, operating from a plank across two barrels in the street. Giannini made loans on a handshake to those interested in rebuilding. Years later, he would recount that every loan was repaid. As a reward to the garbage man whose wagon transported the bank's assets, Giannini gave the man's son his first job when he turned 14.

Branch banking was introduced by Giannini shortly after 1909 legislation that allowed branch banking in California. Its first branch outside San Francisco was established in 1909 in San Jose. By 1916, Giannini had expanded and opened several other branches. Giannini believed in branch banking as a way to stabilize banks during difficult times as well as expand the capital base. He bought banks throughout California and eventually Bank of Italy had hundreds of branches throughout the state. 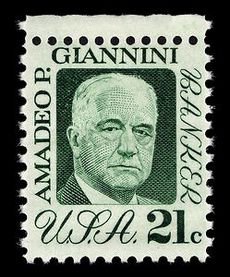 Bank of America, Los Angeles had been established in 1923 by Orra E. Monnette. Giannini began investing in the Bank of America, Los Angeles because conservative business leaders in Los Angeles were less receptive to the Bank of Italy than San Franciscans had been. Bank of America, L.A. represented a growth path for Giannini, and Monnette, President and Chairman of the Board, was receptive to Giannini's investments. Upon finalizing the merger, Giannini and Monnette concurred that the Bank of America name idealized the broader mission of the new bank. By 1929, the bank had over 400 banking offices in California. The new institution continued under Giannini's chairmanship until his retirement in 1945; Monnette retained his Board seat and officer's position. Furthermore, as a condition of the merger, Monnette was paid for handing Giannini the "Foundation Story" rights to the bank, a decision that Monnette later came to regret. Prior to Monnette's creation of the Bank of America Los Angeles network, most banks were limited to a single city or region. Monnette was the first to create a system of centralized processing, bookkeeping and cash delivery. By diversifying the scope of community that the Bank of America served following its merger, the institution was better prepared to ride out minor, local economic issues.

Giannini helped nurture the motion picture and wine industries in California. He loaned Walt Disney the funds to produce Snow White, the first full-length, animated motion picture to be made in the US. During the Great Depression, he bought the bonds that financed the construction of the Golden Gate Bridge. During World War II, he bankrolled industrialist Henry Kaiser and his enterprises supporting the war effort. After the war, he visited Italy and arranged for loans to help rebuild the war-torn Fiat factories. Giannini also provided capital to William Hewlett and David Packard to help form Hewlett-Packard.

Giannini founded another company, Transamerica Corporation, as a holding company for his various interests, including Occidental Life Insurance Company. At one time, Transamerica was the controlling shareholder in Bank of America. They were separated by legislation enacted by the U.S. Congress in 1956, when Congress passed the Bank Holding Company Act, which prohibited bank holding companies' involvement in industrial activities.

Giannini had long been a Republican, but with the collapse of the Republican Party in the Great Depression, he concerned himself with Democratic state politics. In the 1934 California gubernatorial election Giannini worked hard to block left-wing novelist Upton Sinclair from winning the primary for the Democratic nomination. He failed, and with support from the White House, he endorsed and helped finance the Republican candidate, incumbent Frank Merriam, who did defeat Sinclair.

Upon Giannini's death in 1949, his son Mario Giannini (1894–1952) assumed leadership of the bank. Giannini's daughter, Claire Giannini Hoffman (1905–1997), took her father's seat on the bank's board of directors, where she remained until the 1980s. Giannini is buried at Holy Cross Cemetery in Colma, California. 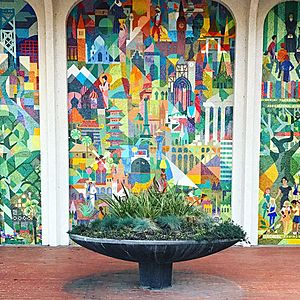 All content from Kiddle encyclopedia articles (including the article images and facts) can be freely used under Attribution-ShareAlike license, unless stated otherwise. Cite this article:
Amadeo Giannini Facts for Kids. Kiddle Encyclopedia.