Callicoon is a hamlet and census-designated place in Sullivan County, New York, United States. The population was 167 at the 2010 census.

Callicoon is in the western part of the county in the Town of Delaware. 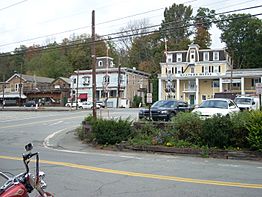 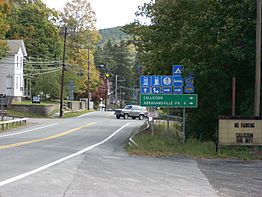 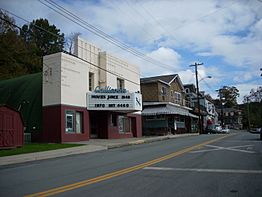 Callicoon Theater and other buildings in the business district. 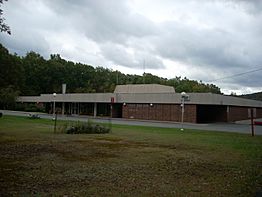 Callicoon got its name from Dutch hunters who settled the location in the 17th century. Because of the population of wild turkeys in the area, they named the community Kollikoonkill which translates into Wild Turkey Creek. In addition to animal abundance, the area was a source for lumber and a transport center with the Delaware River offering access to coastal cities to the south and east. In the 1840s, the Erie Railroad added to transportation by passing through along the banks of the Delaware River to link the Great Lakes with the East Coast. Because of the train station's vital central location, the community was renamed Callicoon Depot.

In 1888, a major fire destroyed much of Callicoon's business district. The town quickly rebuilt, but lost much of its architectural history prior to the late 19th century. The community's economy also became badly damaged when railroad travel gave way to the automobile. By the late 1960s, tourism took over as the main industry as campgrounds and canoes drew a new generation of visitors. Campgrounds and canoe liveries, followed by bed and breakfast inns, drew a new generation of vacationers. The Villa Roma Resort and Conference Center also opened, increasing the number of vacationers to the area. Additionally, the Upper Delaware Scenic and Recreational River was created in 1978 to protect the land of the scenic valley, maintain quality of the Delaware River, and enforce environmental sensitivity in the area.

There were 94 households out of which 28.7% had children under the age of 18 living with them, 43.6% were married couples living together, 17.0% had a female householder with no husband present, and 35.1% were non-families. 28.7% of all households were made up of individuals and 12.8% had someone living alone who was 65 years of age or older. The average household size was 2.30 and the average family size was 2.79.

The Villa Roma Resort and Conference Center is a full resort hotel with tennis, cross-country skiing, lodging, and conference facilities. It is one of only a few resorts remaining in Sullivan County, a county once well-known internationally for its massive resorts and entertainment venues.

Canoeing, rafting, camping, and hunting are major draws to the area. The Callicoon Canoe Regatta is held annually on a Sunday in early July. Dozens of competitors try their paddles on a journey navigating from the Callicoon Bridge to Skinner's Falls.

The Sullivan County Farmer's Market in Callicoon Creek Park on Sundays starting at 11:00 A.M. from Memorial day through November draws a big crowd as well. There is also a Holiday Market held in early December.

The Callicoon Business Association sponsors the Annual Tractor Parade, featuring more than 200 antique and modern tractors that travel down Main Street, in early June. The Callicoon Street Fair is held annually on the last Saturday of July, and once again, Main Street is closed down and turned over to a multitude of various vendors. The Street Fair features antiques, arts and crafts, homemade and hand-crafted items, food, and music.

All content from Kiddle encyclopedia articles (including the article images and facts) can be freely used under Attribution-ShareAlike license, unless stated otherwise. Cite this article:
Callicoon (CDP), New York Facts for Kids. Kiddle Encyclopedia.