Calliope is a rural town and locality in the Gladstone Region, Queensland, Australia. In the 2016 census, Calliope had a population of 3,438 people.

Calliope Post Office opened on 1 March 1864. Alluvial gold was mined in the area after its discovery in 1862. The following year Queensland's first goldfield was officially proclaimed. In 1872, a state primary school was opened.

The Port Curtis Historical Village is situated on the banks of the Calliope River, as well as the Boyne River. Lake Awoonga resulted from the construction of a dam on the Boyne River. Lake Awoonga supplies water to the city of Gladstone, and Calliope and other townships in the region, as well as supplying the major industries for which the Gladstone region is known. Total capacity of Lake Awoonga is 777,000 megalitres (203,412,500,000 gallons). The catchment area contributing to the Lake is 2,240 square kilometres (864.87 square miles) and is surrounded by the Boyne, Dawes and Many Peaks Ranges.

Lake Awoonga is home to a thriving array of native animals, several of which are of conservation significance. Two fauna species are listed as vulnerable: the yellow-bellied glider and the grey-headed flying fox. For the bird-watching enthusiast, Lake Awoonga is a paradise with more than 225 species or over 27% of Australia's bird species found in the region. The southern squatter pigeon is listed as vulnerable and of conservation significance, and twenty-seven species are listed on International Migratory Conservation Agreement lists. Lake Awoonga is arguably one of the most important near-coast bird refuges on the East Coast of Australia. 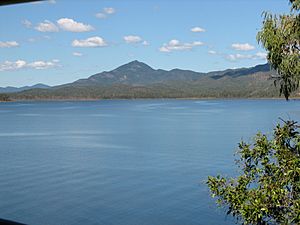 The Gladstone Area Water Board operates a fish hatchery which breeds barramundi and mangrove jack for release into Lake Awoonga. Barramundi over 20 kg (44.09 lbs) are regularly caught, and the heaviest caught by August 2008 weighed in at a hefty 36.5 kg (80.47 lbs). In addition, the mangrove jack breeding program has resulted in Lake Awoonga holding the largest stocks in Australia with over 13,000 released. Since 1996 over two and a half million barramundi fingerlings and 340,000 mullet fingerlings have been released into Lake Awoonga.

Calliope has an 18-hole golf course with club and a bowls club. There are two pubs and an annual rodeo held each year. The town also has a swimming pool, racecourse, sports fields, Hazelbrook Park and a skateboard ramp.

Recent years have seen the introduction of a child care centre, supermarket shopping, specialty stores, doctors surgeries and other essential services. A large number of new homes and town houses have been built in Calliope due to its proximity to Gladstone Port and associated industries such as LNG.

Until 2008, Calliope was the council headquarters of the Calliope Shire which included Boyne Island, Tannum Sands, Ambrose, Mount Larcom and most of the industrial plants plus Awoonga dam. Calliope has now become one of the towns under the umbrella of the Gladstone Regional Council after the merger of the Calliope Shire Council and the former Gladstone City Council. GRC still maintain significant offices in Calliope.

All content from Kiddle encyclopedia articles (including the article images and facts) can be freely used under Attribution-ShareAlike license, unless stated otherwise. Cite this article:
Calliope, Queensland Facts for Kids. Kiddle Encyclopedia.