Canada Place is a building situated on the Burrard Inlet waterfront of Vancouver, British Columbia. It is the home of the Vancouver Convention Centre, the Pan Pacific Vancouver Hotel, Vancouver's World Trade Centre, and the virtual flight ride FlyOver Canada. The building's exterior is covered by fabric roofs resembling sails. It is also the main cruise ship passenger terminal for the region, where cruises to Alaska originate. The building was designed by architects Zeidler Roberts Partnership in joint venture with Musson Cattell Mackey Partnership and DA Architects + Planners.

Canada Place can be reached via the SkyTrain line at the nearby Waterfront Station terminus or via West Cordova Street in Vancouver. The white sails of the building have made it a prominent landmark for the city, as well as drawing comparisons to the Sydney Opera House in Sydney, Australia and the Denver International Airport in Denver, Colorado.

The structure was expanded in 2001 to accommodate another cruise ship berth. In 2009/10, for the 2010 Winter Olympics, Canada Place served as the Main Press Centre.

Panorama view of Canada Place's sails with the North Shore in the background.

Canada Place was built on the land which was originally the Canadian Pacific Railway's Pier B-C. Built in 1927, its primary purpose was to serve CPR and other shipping lines trading across the Pacific Ocean.

During Expo 86, the Canada Pavilion at Canada Place was opened by Prince Charles and Brian Mulroney, Prime Minister of Canada. Among the largest and most elaborate pavilions presented by any nation at any World's Fair, the Canada Pavilion hosted more than 5 million visitors prior to the October 13, 1986 closing date.

Throughout the year many community events are held at and hosted by Canada Place. 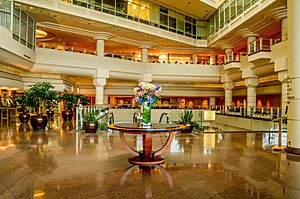 The Pan Pacific Vancouver opened in January 1986 and has 503 rooms and suites, two restaurants, and a lounge.

The Hotel is operated by Pan Pacific Hotels and Resorts. 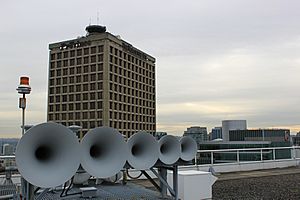 The North five of the ten Heritage Horns.

The Heritage Horns, formerly known as the 12 O'clock Horn, sound the first four notes of O Canada every day at noon and can be heard throughout Downtown Vancouver and beyond. The ten horns have five facing north and five facing east on the roof of the Pan Pacific hotel and have an output of 115 Decibels. They were the brainchild of Les Southwell, designed and constructed by Robert Swanson for Canada's centennial 1967, and funded by BC Hydro. They were originally on the roof of the BC Hydro building (now The Electra) and were silent when the headquarters was converted to condominiums in the early 1990s. The horns started sounding again on November 8, 1994 after being acquired, refurbished, and relocated to Canada Place. Due to complaints, the timer was changed from mechanical to electrical soon after to make them accurate. They sounded 26 times during the 2010 Olympics, once for each medal won by Canada. The first was at 7:30pm on February 13 for a silver won by Jennifer Heil. The Heritage Horns will also be sounding at 7:00 p.m. each evening from March 26 to April 16, 2020 in support of essential service workers across Canada. Another notable time signal in the area is the 9 O'Clock Gun across the harbour in Stanley Park.

All content from Kiddle encyclopedia articles (including the article images and facts) can be freely used under Attribution-ShareAlike license, unless stated otherwise. Cite this article:
Canada Place Facts for Kids. Kiddle Encyclopedia.