The Cannelton Locks and Dam is a tainter-gated dam with two locks on the Ohio River, on the border between the U.S. states of Indiana and Kentucky. The dam is 2 miles (3.2 km) southeast of Cannelton, Indiana. Construction of the locks began in July 1963. The locks began operation in December 1966 and were completed April 1967. Construction on the dam started in August 1965 and the dam was completed in 1974. The structure was designed, built, and is operated by the United States Army Corps of Engineers Louisville District.

The Cannelton Dam is located at river mile 720.7 (measured from Pittsburgh, Pennsylvania) and has two sections. The main section is 1,412 feet (430 m) long with twelve tainter gate. The gates are held between 15-foot-wide (4.6 m) piers. Each gate is 42 feet (13 m) high and 100 feet (30 m) long. Electric hoists on top of the piers are used to raise or lower the gates. At the end of the gated section of the dam there is second section, a concrete fixed weir on the Kentucky side of the river. The weir is 195 feet (59 m) long.

The locks reduce travel time because it enables large commercial tows to go through only one lockage rather than the three locks it replaced. Also the large lock chamber allows a large vessels to pass through the lock in a single operation instead of using smaller lock sections. 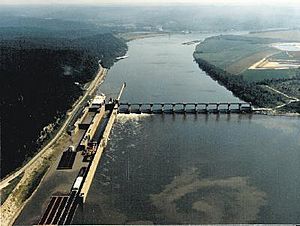 Cannelton Locks and Dam on the Ohio River near Cannelton, Indiana.

On January 27, 1960, the project was approved by Secretary of the Army, Wilber Marion Brucker. Under the authority of Section 6 of the Rivers and Harbors Act, approved March 3, 1909, the existing Locks 43, 44 and 45 were replaced. The construction of the locks began in July 1963. The locks began operation in December 1966 and were completed April 1967. Construction on the dam started in August 1965 and the dam was completed in 1974. The structure was designed, built, and is operated by the United States Army Corps of Engineers Louisville District.

There were 128 acres (0.52 km2) of overlook property that was initially built during the construction project. In 1995, the property was excessed to the United States Fish and Wildlife Service for use as a wildlife habitat.

American Municipal Power (AMP) is currently outfitting the dam to divert water to three bulb turbines to generate an average gross annual output of approximately 458 million kilowatt-hours (kWh). The project includes the construction of an intake approach channel, a concrete powerhouse, and a tailrace channel. The powerhouse will contain three horizontal 28 MW bulb-type turbine and generating unit with total rated capacity of 84 MW at a gross head of 25 feet (7.6 m). Construction began in 2009. Excavation and cofferdam construction was completed in 2010. Powerhouse construction began in 2011. All concrete work on the powerhouse has been completed and work has begun on the interior. The project that will cost an estimated $416 million.

All content from Kiddle encyclopedia articles (including the article images and facts) can be freely used under Attribution-ShareAlike license, unless stated otherwise. Cite this article:
Cannelton Locks and Dam Facts for Kids. Kiddle Encyclopedia.