The McAlpine Locks and Dam are a set of locks and a hydroelectric dam at the Falls of the Ohio River at Louisville, Kentucky. They are located at mile point 606.8, and control a 72.9 miles (117.3 km) long navigation pool. The locks and their associated canal were the first major engineering project on the Ohio River, completed in 1830 as the Louisville and Portland Canal, designed to allow shipping traffic to navigate through the Falls of the Ohio. 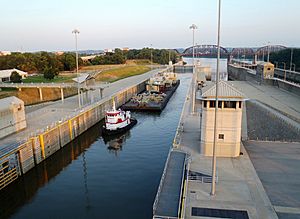 Tugboat at McAlpine Locks and Dam, 2012 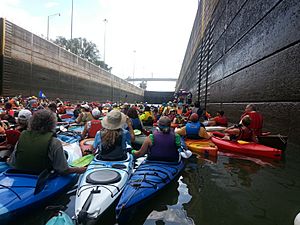 The system was renamed the McAlpine Locks and Dam in 1960 in honor of William McAlpine, who was the only civilian to have ever served as district engineer for the Corps of Louisville. At present, the normal pool elevation is 420 feet (130 m) above sea level and the drainage area above the dam is 91,170 square miles (236,000 km²). The average daily flow at McAlpine is 118,000 cubic feet per second (3,340 m³/s). The lock chambers are located at the dam on the Kentucky side of the Ohio River and are capable of a normal lift of 37 feet (11 m) between the McAlpine pool upstream and the Cannelton pool downstream. The hydroelectric plant consists of eight turbine units with a net power generation capacity of 80,000 kilowatts.

The McAlpine locks underwent a 10-year, $278 million expansion project scheduled to be completed in 2008, but was completed in early 2009.

The hydroelectric plant is owned and operated by Louisville Gas & Electric, a subsidiary of PPL Corporation while the locks are operated by the Army Corps of Engineers.

All content from Kiddle encyclopedia articles (including the article images and facts) can be freely used under Attribution-ShareAlike license, unless stated otherwise. Cite this article:
McAlpine Locks and Dam Facts for Kids. Kiddle Encyclopedia.